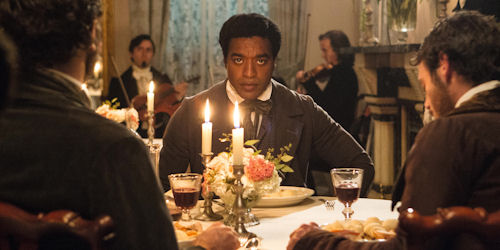 Slavery is not quite a taboo subject but is certainly not one that is dealt with seriously in cinematic terms very often. At the start of 2013 we were given Tarantino’s Django Unchained which tackled slavery in a stylised fashion with bloodshed being the main method of emancipation and without me ever really getting a sense of the brutality of life as a slave. With Tarantino at the helm the film felt all too fictional to have an effect. Within just the first few minutes of Steve McQueen’s 12 Years a Slave I felt like I could finally comprehend just how slaves were seen in pre-Civil War America in the eyes of their masters. These were not human beings, they are a commodity and closer to cattle than anything deserving basic rights.

Chiwetel Ejiofor stars as the free black man Solomon Northup who is kidnapped and sold back into slavery while his wife and children are left behind to assume him dead. More used to a life as a relatively respected gentleman and musician Solomon finds himself stripped of everything he owns down to his name and struggles to retain his dignity and sense of self. After being sold on to a relatively kindhearted plantation owner, played by Benedict Cumberbatch, Solomon struggles to keep his head down and after rubbing up an overseer (Paul Dano) the wrong way is sold on to a brutal new master called Epps (Michael Fassbender) and his equally cruel wife (Sarah Paulson).

It is on this second plantation that Solomon suffers the most as he gradually loses all hope of ever returning to his civilised life and more importantly his family. His learned past does not do Solomon any favours as his intelligence frequently threatens to leave him out of favour with his master and therefore suffer at the thin end of a whip. The only slave sticking out more than Solomon is a young woman Patsey (Lupita Nyong’o) who has caught the amorous eye of Epps and with it the scorn of Epps’ wife. Patsey brings about some of the most graphic violence in the film which hits home, hard.

The plot of 12 Years a Slave is not a complicated one as we stick with Solomon throughout his years spent enslaved. The day in, day out barbarism that surrounds him is displayed without glamorisation by McQueen in a film that is beautiful to behold but positively painful to watch. Here the violence is not cartoonish and the audience is made to feel every lashing delivered by the whip and you are never sure when the next beating will come. The whole 2+ hours were a hard-hitting experience and while I would never suggest that I enjoyed the film as such it truly is a masterpiece that manages to be powerful and intimately epic.

Ejiofor may be surrounded by more recognisable names (other than those already mentioned Brad Pitt and Paul Giamatti also pop up) but he more than holds his own as he takes the substantial weight of the film on his shoulders. It is Ejiofor who leads us on this journey with every grimace and wince his detailed performance brings with it. He is nothing short of magnificent which will be no surprise to anyone who has seen any of his work to date.

12 Years a Slave is a searing film that takes its weighty subject seriously whilst not scrimping on cinematic artistry. I cried for the second time this week and the audience of press applauded the film which is not a common occurrence. Expect to be hearing a lot about this film when the Oscars come around.