“I don’t care what you believe in, just believe in it.” 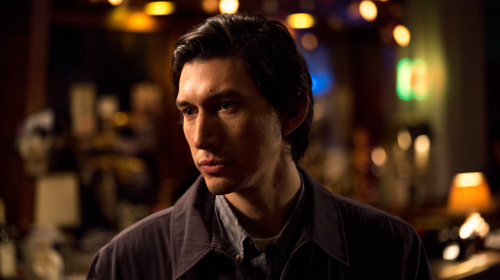 To criticise Paterson is to try to fit it into a box it isn’t made to fit. You might think the film lacks enough plot, or humour, or drama but it has exactly as much plot, humour, and drama as writer-director Jim Jarmusch wants it to have. If you dislike Paterson then you and Jarmusch are just going to have to agree to disagree.

In Paterson we spend seven days in the life of Paterson (Adam Driver), and to a lesser extent his girlfriend Laura (Golshifteh Farahani), as he goes about his business. Every day Paterson gets up, walks to work, drives a bus around the city of Paterson, walks home, briefly indulges in Laura’s latest fantasy, and then walks their dog to his local bar. Lather, rinse, repeat. In his spare moments Paterson write poems; beautifully mundane poems about small moments written for the film by Ron Padgett. Laura urges Paterson to share his poems but he seems content to live his life and keep his poems as a private expression.

Paterson has no dramatic plot twists, emotional blowouts, or stunning visuals. Like Paterson’s poetry Paterson delights in the minutiae of day-to-day life and the film, running to nearly two hours, allows you to soak up Paterson’s daily routine. As you become familiar with the patterns of Paterson’s days the repetition becomes reassuring and comforting, and the tiny differences leap out at you in all their insignificance. If Paterson is a poem then each day makes up a verse with plenty of rhyming in between.

Adam Driver is the perfect man to tackle this understated role; his expressive face says so much as his character says so little. He plays Paterson as a humble man who keeps his own emotions to himself while absorbing everything from those around him. As a constant observer it is easy to easy to see how Paterson might come to express himself through prose. As his bus moves inconspicuously through the city so Paterson goes unnoticed in the town that is his namesake taking us along for the ride. Paterson, and Paterson, teaches us to look and listen and revel in the details. By the end of the film we might as well be Paterson; few films will have you this absorbed in the life of their lead character.

A perfect unassuming film that celebrates the undramatic wonder of the everyday, Paterson is a charmer. Just don’t go expecting anything explosive.

Paterson is out in UK cinemas now.

It is time to set aside those unwritten LFF reviews as the LKFF is here! The London Korean Film Festival has returned from the capital and runs until 17th November with a season of classic and contemporary Korean cinema. This year’s festival has a special focus on films that explore the lives of Korean women as told through the lenses of female directors as reflected in Thursday’s opening gala screening of Lee Kyoung-mi’s new thriller The Truth Beneath. The festival closes in London with Hong Sang-soo’s latest Yourself and Yours after which the festival goes on tour to Sheffield, Manchester, Nottingham, Glasgow and Belfast from 18th – 27th November.

The festival features a wide range of Korean films and gives a rare opportunity to see films that might not make it back to the big screen in the UK. See the official website for more info or read on to find out what I have seen so far.

In Lee Kyoung-mi’s second feature the wife (Son Ye-jin) of an aspiring politician finds her life upended when her teenage daughter goes missing at the start of the national election campaign. While her husband (Kim Joo-hyuk) remains focussed on his political ambitions she instead picks up where the police investigation has failed and delves into the second life her daughter was leading.

With clever cinematic devices and an unflinching eye Lee Kyoung-mi explores both the story of a young girl’s struggle to find acceptance and friendship alongside a grieving mother’s struggle to get to know her daughter when she is no longer around. The film’s twists created loud gasps from the audience and the tense narrative had us gripped from start to finish. The lead performance by Son Ye-jin was powerfully understated and complex. A powerful opening to the festival and a strong statement to show this year’s commitment to showing the life of Korean women on-screen.

Another female director Lee Hyun-ju tackles a different kind of female relationship in Our Love Story as she explores the beginnings of a romance between a female student and an older young woman (Lee Sang-hee and Ryu Sun-young). The film is much more understated than the thriller above as it focusses on emotional nuance above flashy plot twists.

The romance between the two lovers is handled with great care and sensitivity. Free from the male gaze Our Love Story is capable of including sex between two women without including a full panoramic view of entwined naked forms à la Blue is the Warmest Colour or The Handmaiden. Instead we have a more restrained, tender, and authentic romance on-screen as part of a sweet and emotionally complex romantic drama.

I really do recommend you seek out a screening, a trailer of highlights is below, and if anyone has a spare ticket to the closing gala please let me know; it has already sold out!