So Buried is quite good. Ryan Reynolds makes you really believe he is stuck in a box, and isn’t the most sympathetic of characters and yet you do feel for him.

The main crux of the film is Reynolds phoning people on the mobile he is buried with. For the most part this is used to progress the plot but there is at least one phone call that is pure filler and an attempt to round the character a bit more.

Ultimately I would recommend Buried, not least because it’s a rare chance to see a film set in a box. It’s also quite amazing to see the variety of lighting and camera angles used, which helps make the film watchable beyond an hour. Also Stephen Tobolowsky totally reprises his character from Groundhog Day. Well, obviously it doesn’t but there we go.

Now here’s the text conversation I had directly after the film which reenacts some key moments, this may contain spoilers so run away if you’re sensitive.

This is what Buried would have been like if he had only been able to text… and there was a subplot in a car park.

I was followed in the car park by some dude saying, hey sweetie followed by whistles and noises. I got in my car and put my foot down.

No one chatted me up! My room is filling up with sand

If you call that chatting no wonder you’re single. It was mildly concerning. Dig your way out!

Am I going to have to escort you to your car in future? I think I’ll take a moment to call my mum, because that will help.

I’m hoping it was a one off. Would you be all manly at the weirdo? Did you mum like the flowers?

I’d freak him out right back! She didn’t even remember them, what a waste.

With your trouser snake?

I set fire to the trouser snake but it melted my glow stick and now there’s goo everywhere.

Oops there it is. 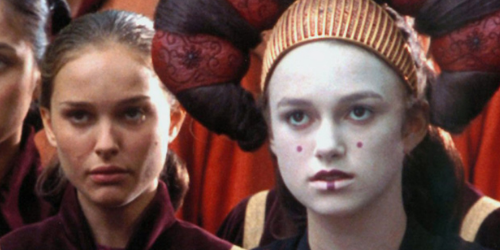 Sigh. The inevitable has happened and Star Wars will be completely re-released in cinemas in 3D. George Lucas the original tinkerer strikes again.

Phantom Menace will be released in 2012. In 3D. Yep, that’ll help. Simon pegg has summed up my feelings well: 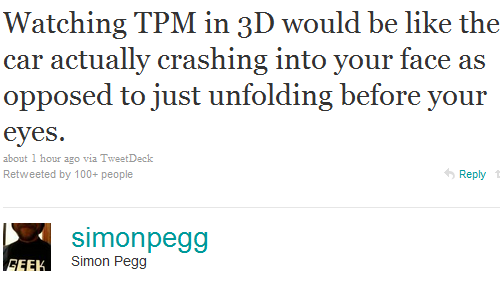 On a different note, it’s odd to think that eleven years ago I could be easily convinced that Keira Knightly was Natalie Portman.

Buried
Ryan Reynolds stuck in a box for an hour in a half. This is either going to be a brilliant and groundbreaking film or tedious and claustrophobic. The reviews look positive.

Devil is easily the best thing Shyamalan has been involved with in years, though here he only provided the story… which he stole from Agatha Christie.

Devil is a neat little horror thriller covering just 80 minutes as five people are trapped in the lift. One of them is the devil and it moves along nicely from there. Thankfully we weren’t confined to the lift and we get to see the police and maintenance try to get into the lift with varying degrees of success.

There’s no mind blowing dialogue or action but the film is so much what you’d expect it’s hard to be disappointed, plus there’s plenty of half-recognisable faces to keep you amused. Caroline Dhavernas is so underused it’s not even funny.

Even the reveal of which character is the devil is not really a surprise. Look at the picture about and think who you would have be the devil. You got it right!

As of right now public booking for this year’s London Film Festival is open!

That means you can finally buy the tickets you’ve been wanting for the festival’s most anticipated films. Well, more realistically they’ll all be fully booked before you even get to the page thanks to priority booking for BFI members (aka me) having started a week ago with the most popular films selling out in the first morning.

Ah well. The good news is that Mild Concern has been certified as Press and will be seeing as many films as possible during the festival. That means more reviews than ever before, which will be less coherent than ever.

Welcome to the casting couch, have a seat. Don’t mind that, just move it to one side and pretend it wasn’t there. Now what part was it you wanted? Your hair looks nice.

Emma Stone/Mia Wasikowska for Spiderman
The Spiderman reboot has been getting more and more exciting with Marc Webb and then Andrew Garfield becoming attached. Now we might get Mia Wasikowska or even better Emma Stone as the female lead. This must happen.

Christopher Nolan has Shortlist of Directors for Superman
Since Nolan was given the power to guide Superman back to movie glory we haven’t heard much until now. Rumour has it he has a shortlist of five directors to helm the franchise. They are Zack Snyder, Duncan Jones, Matt Reeves, Tony Scott and Jonathan Liebesman. Any of the first three please!

In other news: There may well be a new 3D version of Day of the Triffids in the works. Can’t be any worse than the BBC’s attempt, apart from Izzard’s bits that is. He was great.

Lots of films means lots of Googling for me. Let’s see what I found…

Eat Pray Love
Over two hours of watching Julia Roberts on holiday. She’ll start off upset then be smiling all round Bali while making gooey eyes at Javier Bardem.

Peepli Live
This week’s Hindi film. Something about politics, land and a threat of suicide.

The Town
A gritty, intense, action thriller, or so say the various quotes on the poster. It looks a bit pants to me but the reviews are good… and there’s Jon Hamm.

The Wildest Dream
One man goes up everest and 75 years later another man finds his frozen corpse. Erm, spoiler alert?

Budrus (limited release)
Documentary and lazy copy and pasting time! “Follows a Palestinian leader who unites Fatah, Hamas and Israelis in an unarmed movement to save his village from destruction. Success eludes them until his 15-year-old daughter jumps into the fray.”

Dragon Hunters (limited release)
A seemingly forgotten animated film limps its way into UK cinemas years after coming out on DVD in the US. It is, surprisingly, about two dragon hunters.

Enter the Void (limited release)
A kid deals drugs, dies and comes back as a ghost to look over his sister. Or haunt her I guess.

Frozen (limited release)
Three people get stuck on a ski lift. One user on IMDb warns, “The film is pretty intense”. Be careful.

Here’s a tricky dilemma. There’s a great animated short from Aardman featuring a 9mm tall girl. The short is a little bit lovely but is being used to advertise the Nokia N8.

So lets make an agreement, I’ll post the video below if you try your hardest not to be swayed by the advertising. OK?

Kiernan Shipka is nearly 11 and is acting in one of TVs greatest shows Mad Men. Also she seems to have a better grasp of the English language than me.

Below is a snippet from an interview which you can read in full here.

A: I think Sally’s actually much better than I would be, given her situation. Sally is really, really reserved. Divorce can be terribly stressful and confusing. Add to that an emotionally unresponsive mother and a physically absent father, I think Sally’s actions are pretty tame. If I was experiencing Sally’s situation, I would be a complete terror of a kid.

And so yet another genuinely good film is hidden behind its own marketing. This is not a big old whacky comedy starring funny-man Robin Williams, this is a deeply dark and funny film starring Robin Williams in his best role in a ridiculously long time.

This is a great film. I can’t really say why the comedy is so dark without spoiling a major plot point but the film is certainly surprising.

What a vague and unsophisticated review. The ending isn’t great and perhaps if I wasn’t expecting so little from Robin Williams I might not have enjoyed it so much. I did it enjoy it though. So there.

World’s Greatest Dad is out this Friday.