It’s been ten months since the group tackled a not-so-nice Jesus impersonator before deciding to Swap Shop their powers during the Christmas special last year, but Misfits is finally back! The third series has kicked off in true Misfits fashion with a cleverly OTT opener that attempts to boggle our brains and keep us edge-of-our-seats entertained as well.

There is always an overpowering worry with a new season of a television show that it somehow just won’t live up to the standards that it has set before itself. That worry is increased exponentially when the actor playing the proverbial glue that holds the show’s characters together decides to leave the show. We can’t blame Robert Sheehan, who played Nathan, for wanting to move on to better things and a lot of the blame for the show going downhill could have been pinned on that decision if the show had suffered at all. Read on after the break and expect episode spoilers. 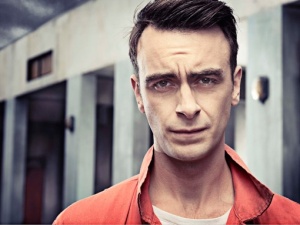 Instead, newcomer Rudy (played by This Is England‘s Joseph Gilgun – right) does far more than fill the immense void that Nathan left when his character was jailed during a holiday to Las Vegas (click here for the 10 minute online exclusive, “Vegas Baby” if you haven’t seen it already). Playing essentially the same character – an almost emotionally impotent and constantly arrogant turd – Rudy is on hand to slip on Nathan’s sarcastic boots in double the time as we learn his power is that he can split into two physical versions of himself upon moments of doubt or pressure. Rudy’s power of splitting into a polarized version of himself means we get double the Rudy and double the emotional development on-screen and in our hearts as his ability allows us to see who the character is directly.

After Rudy has become an almost instant hit with us, his inadvertent exploits manage to intertwine themselves with our Misfit group’s current ventures and apparent history as well. In the episode we also gain a little insight into the new powers of our characters after they sold their old for new in the Christmas special. Simon appears to have immediate foresight which helps with his training to becoming the time-travelling hero that we see in series 2; Kelly is still struggling to get people to respect her as she bought the power of “a fucking rocket scientist” which doesn’t seem to help her thus far; Alisha has gotten a far superior skill than her last “if you touch me, you’ll want to shag me” power with the ability to see through the eyes of any other person; and finally, Curtis got “the only power that was left”: the ability to transform into a female version of himself – which is a slight downgrade from conscious time-travelling.

There is plenty for this season to cover with the gang still not knowing that Simon is the Man In The Mask from series two. As well as the impending and inevitable departure of Simon, Seth (the secluded man who buys, sells and transfers powers) looks to have his own mission for the coming episodes, and thanks to Rudy’s carelessness, our group now has two more murders on their hands and are back in community service – just when we thought the band of misfits might be fully rehabilitated, ey? Let the anarchy begin!

Misfits airs at 10pm on Sundays over on E4.