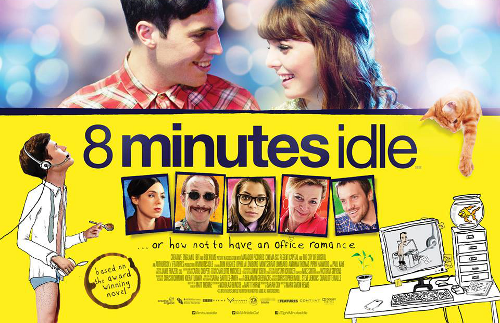 but co-wrote the screenplay as well. 8 Minutes Idle is a dark British comedy about a man called Dan who is forced to start sleeping in the call centre where he works after being kicked out of his home by a knife-wielding mother.

Squeezing in twenty minutes on his way to the film’s premiere (it hits selected cinemas this Friday) Matt answered my questions on writing, film-making, and of course his favourite carbs…

On basing 8 Minutes Idle on a personal experience:

It’s sort of two experiences that came together at once. When I finished university I went to an employment agency and asked what job I could get. They sent me to a call centre and I started working there. I had sold a novel but it was going to be a year and a half before it came out so I just needed to make some money. I wanted to carry on writing so I swapped from the day shift to the night shift and for a while I was doing the day shift and the night shift and I thought “well this is only one step away from actually sleeping in the office”. I didn’t actually do the sleeping in the office but I fictionalised it and imagined a character who did. At the same time my dad had a car accident and I just imagined a story spilling out from there.

On getting a film made of the novel:

It was optioned when it originally came out and I wrote a very different screenplay then. It was optioned by a few people over the years with various ideas; some people wanted to turn it into a TV series, some people wanted to do it as a film. Nicholas Blincoe, my co-writer on the screenplay, was on an mp3 swapping site with the producer Sarah Cox and she told him that there was an iFeatures coming up for a film set in Bristol. So that was the starting point of it happening again. Nicholas and I met with the producer and director and then with iFeatures the four of you are kept together throughout the whole process so we were talking and thinking about it from then on. I optioned it to Sarah’s production company and we started again.

On adapting the novel into a screenplay:

It was a long process. It went through a lot of different drafts along the way. iFeatures had a series of training programs and part of the program was getting a sense that you’ve got to be very clear with genre in film. You’ve got the changes that are immediately a part of that, and the novel is 500 pages and the film’s a ninety minute film. It is hard to get everything into those ninety minutes so what we did was we split the narrative into two. The narrative [from the novel] about Dan when his dad gives him names of seven women that he has to go and track down – that whole plot is gone from the film.

On whether he enjoyed the writing process:

I really liked it because … with a novel you never know whether it has worked until it comes out and the only people you have to listen to are your editor and your agent. With a film the point at which you find out whether it works or not is when you’re showing it to an audience, particularly if it’s a comedy. Are people laughing, are people not laughing? You can fight in the room and say “somebody will get this joke somewhere” but when you see it and everyone sits there baffled you think “well OK”. I enjoyed that process because it’s something I’d never done before. Previously I didn’t really mind whether people liked my novels or not I was just delighted to be writing them. With a film there’s more people on whose approval the project depends.

On how he feels about the finished film:

I don’t want to say I was surprised to be happy because it’s not that. It’s more a sense that I am really pleased with the way it turned out. There are so many stages along the way where you don’t know whether it is going to turn out OK. There are so many intangibles on a film. I think Mark has done a brilliant job of direction but it was his first film so I didn’t know what to expect until we saw it. I have a few friends who’ve had films that haven’t turned out the way they wanted so I was really pleased with how it turned out.

On whether he was on set for the filming:

A little bit, they kicked me off near the beginning because they wanted to give Mark time to establish himself as a director. I think, without taking any credit for anything other than the writing, I was more involved than most writers would be in terms of what they allowed me to do. They were very good about that because writers are annoying on certain projects. The first time I went down to the set they had the script and they were crossing out what they couldn’t do that day and I could see why they didn’t want me to see that because they thought I was going to go mad.

On getting involved with more films:

I’d love to. There’s only one of my other novels that really lends itself to film adaptation which is a book of mine called Cherry and I’d love that to be made into a film. Equally I’d like to do something new. Since finishing the film I’ve written a TV script and some TV treatments for new projects and if any of those got greenlit then I’d be delighted to do that for a while.

On allowing someone else to adapt one of his novels:

I would for any novel apart from Cherry because Cherry is the one that I’d really like to do. Any other I’d be happy to let somebody else do it, so long as I got some money for it. You don’t want the money for money’s sake but you want the money so that the person’s serious. Some of my other books there have been screenplays, there was a really good screenplay written by a guy called Steve Barron for a book of mine called Dreaming of Strangers. He wrote this screenplay for that and I loved it, I really loved it.

On writing original screenplays versus novels:

The media is changing all the time. When I started writing novels it was partly because it was the easiest way to reach an audience quickly. Now it’s quite hard. If you write a novel now a lot of the time you need to promote it so much more. It’s still a struggle to get people to see your film, we’ve experienced that the hard way, but it does seem to be slightly easier than publishing a novel and making it reach readers. I would still like to write more novels in the future but at the moment the visual side is taking over.

On being a disciplined writer:

I haven’t been recently but I used to be. I sat down at a desk every day for nine years and wrote six novels and three children’s books but recently I’ve just started thinking in a different way. I think when you’re writing a novel you really need to shut everything out and its becoming increasingly hard to do that. I think I’d quite like to keep doing more collaborative stuff and then after a while go back there and shut the door and start writing a novel again.

On the possibility of directing:

On Kickstarter, which was used to fund the release of 8 Minutes Idle:

It seems to be useful in terms of backing independent films and it seems as though all these Kickstarter films have a certain quality and it’s the same quality that I used to look for. I think if Sex, Lies, and Videotape was made now it would be a Kickstarter film so it feels like that it helps that.

And to finish we have Matt’s answers to our soon to be famous Lee Questionnaire:

What is your favourite carb?
Bread. I eat far too much bread. In fact I eat bread for every meal if possible
What’s the first thing you ate this morning?
I didn’t have any breakfast this morning so the first thing I ate was some whitebait which I know sounds odd
What’s the first thing you said this morning?
I was talking to my children. They came in to say that they hope that the premiere went well
If you could be any stationery product what would you be and why?
A pen
If you were to die tomorrow who would you like to punch in the face before you go?
Whoever was the cause of me dying tomorrow