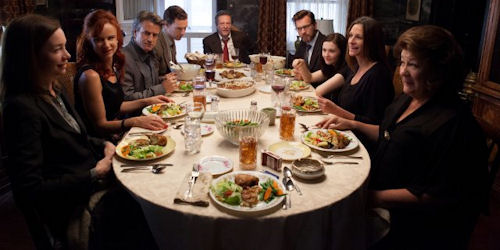 Inside Llewyn Davis
The latest Coen brothers film is out and it is as good as you have come to expect. None of the stills can convey this but the film positively glows. IT GLOWS! Review here.

Jack Ryan: Shadow Recruit
I am incredibly ignorant when it comes to Jack Ryan. Last year at a film-centric pub quiz I failed to answer the question, “what character has been played by Harrison Ford, Alec Baldwin, and Ben Affleck”. The answer was of course Jack Ryan. In my defense the name has never been used as a film title before and it is a little bland. As for the plot? Oh look I’ve run out of

Grudge Match
Stallone and De Niro play washed up boxers who return from retirement to settle a longstanding grudge by punching each other in front of a paying audience. For amusement, and to make you think fondly of my terrible Photoshop abilities, please see the film’s poster.

August: Osage County
When a play is adapted into a film it is often produced as a feature stuffed with “real” actors which struggles with reviews that refer to it as being too stagey. Along comes August: Osage County complete with rave reviews in the theatre, mixed reviews in the cinema, and a whole lot of Meryl Streep. I love theatre and I love Streep so let me at it! Also good for some Cumberbatch perving if that’s your bag.

Teenage
“Teenagers did not always exist. In this living collage of rare archival material, filmed portraits, and voices lifted from early 20th Century diary entries, a struggle erupts between adults and adolescents to define a new idea of youth.” I’ll be honest with you; this film really appeals to me. I almost saw it at last year’s film festival but at least three other films must have clashed with it. At 78 minutes though I am tempted to wait and see if it pops up on TV.

Fonzy
French comedy let down by a lacklustre IMDb entry and no mention at all on UK distributor Studiocanal’s website. Améliorez votre présence sur Internet!

The General
Buster Keaton’s 192os classic action adventure comedy is back in cinemas 87 years and one week after its original UK premiere. Why not go see it so you can stop pretending to be familiar with his work and become able to discuss the film properly without having to rely on IMDb to feed you information.

Dark Days
Re-release of a not quite so old film as Marc Singer’s award winning 2001 documentary about the homeless population of New York who live in underground tunnels returns to UK screens.