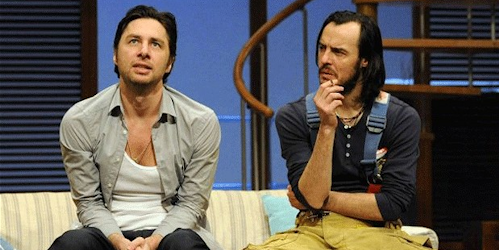 I’ve been putting off reviewing Zach Braff’s debut play All New People for a week now, scared to put into words just how underwhelmed it made me feel. All New People is a single act play set in a beach house in the middle of winter on Long Beach Island, New Jersey. Charlie (Zach Braff) is taking advantage of the isolation in order to commit suicide but is interrupted by an English real estate agent (Eve Myles), a drug dealing fireman (Paul Hilton) and a high-class prostitute (Susannah Fielding).

From this set-up the four characters spend ninety minutes discussing life, the universe, and everything as they try to convince Charlie that life is worth living whilst revealing their own tragic backstories. Each character is given a brief filmed flashback, projected onto the stage, which shows a shocking event from their past. Sadly these felt a little unnecessary as details came out in dialogue later on and seeing recognisable British actors like Amanda Redman doing their best American drawl took me out of the play.

On the whole the acting was without fault, Braff in particular should be commended for not giving himself the spotlight the entire time; he did write the play after all. Instead Braff made the most of his rants and ensured that even when in the background he was subtly drawing attention his way. Eve Myles (of Torchwood fame) was better than I had expected but got off to a rough start as her attempts at “wacky comedy” came off as a little try-hard.

Sadly the play as a whole didn’t really hold together well. The four characters all seemed to have been designed to be as quirky as possible, the backstories we were waiting to discover were of little consequence when they were revealed. Myles’ character in particular had such a bizarre history that felt wholly out of place in the play, and considering the subject matter involved (which I will avoid mentioning) felt a little cheap and crass when mentioned in such a passing manner.

All New People‘s worst crime is being easily forgettable and inconsequential, sorry Zach. All New People is on at the Duke of York’s Theatre until 28th April and tickets are available online but your money would be much better spent buying Garden State on DVD