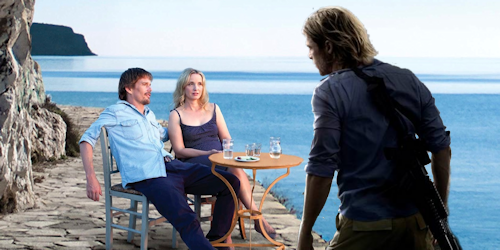 A Haunted House
For some reason some of the team behind the early Scary Movie films have decided to start a new horror movie parody franchise. For any Scary Movie purists this is like the original band getting back together and going on tour.

World War Z
A flaw ridden and troubled film about a global zombie epidemic and the one Brad Pitt who can save us all. Stephen would like you to be kind of excited for this film. Give it a go, just for him.

Snitch
Dwayne “No Longer The Rock” Johnson plays father-with-an-unassuming-name John Matthews who is forced to go undercover for the DEA when his son is set up in a drug deal. I’m pretty sure it is standard practise to hire the parents of criminals to investigate crime. Completely normal. Nothing to see here. Move along.

Before Midnight (limited release)
Fancy almost two hours of pure chatty romance? Has the sun risen on Before Sunrise? Has the sun set on Before Sunset? You’re in luck as Hawke and Delphy are back to be slightly pretentious all over again.

The Seasoning House (limited release)
The house in the title refers to a place where young girls are prostituted to the military. Lovely. An orphaned deaf-mute cares for the girls and scuttles around in the walls before presumably killing everyone in the classic “you rape me and I will literally kill you” revenge thriller tradition.

Like Someone in Love (limited release)
“In Tokyo, a young prostitute develops an unexpected connection with a widower over a period of two days.” Ah good, it’s about time we had another unlikely friendship film. It’s been a while.

I Am Breathing (limited release)
Documentary covering the last few months of the life of Neil Platt, a young father suffering from motor neurone disease.

Black Rock (limited release)
A girly weekend away turns into a horrific fight for survival because that’s just what happens when women are left alone together for too long. Am I right guys? You know I’m right.

Shun Li and the Poet (limited release)
“A study of the friendship between a Chinese woman and a fisherman who came to Italy from Yugoslavia many years ago, who live in a small city-island in the Veneto lagoon.” 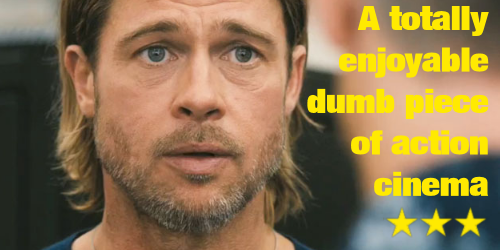 Gerry Lane (Bradd Pitt) was a nice dad man who used to have a super important job at the United Nations. Gerry Lane liked making a breakfast of waffles for his wife and two daughters every day because he’s a nice man. One day a zombie virus broke out and Gerry Lane was told to go and save the world or his family would be left for the zombies, so Gerry Lane decided to visit all the countries in the world and save humanity.

Kid-friendly, bloodless and politically diluted, World War Z is about to hit screens after its lengthy and highly publicized “troubled” production. Rewrites, reshoots, the director of Quantum of Solace and Brad Pitt with silly long hair; it’s understandable that people were apprehensive of the movie. As far as disaster films go though, World War Z is pretty solid.

You read correctly: disaster, not zombie. Sure, the primary antagonist is neither an asteroid nor global warming, but the sheer scale of zombie apocalypsing is insane and very disaster movie-like. The waves of the walking dead ravenously piling over one and other, brutally destroying all in their path is not unlike the tsunamis wiping out NYC in The Day After Tomorrow – it’s just there’s a little more chomping. As we follow Gerry on his worldwide travelogue of the zombie outbreak we bear witness to some truly epic and intense set-piece action that definitely makes up for the film’s blaring flaws elsewhere.

Whilst the third act rewrites have drawn much attention and spawned many tweets that feature their posters wanting to teabag Damon Lindelof it is the first two thirds of the film where most of the problems lie. Early in the film a doctor from Casualty states that “movement is life,” a sentiment director Marc Forster takes a little too much to heart as the film initially rushes from one scene to another with characters mumbling incoherent exposition as quickly and quietly as they can. If I was cool I’d quip something along the lines of this style being as dead but animated as the film’s zombies.

On his speedy country-crawl Gerry also has a nasty habit of leaving everyone behind (mostly because they die – oh, inconsiderate zombies) which means that, aside from a badass Israeli soldier or his family – who are all but dropped from the narrative within 30 minutes – we have no one to root for other than Gerry, who tiresomely dodges death more times than South Park’s Kenny McCormick. I don’t know anyone who doesn’t love a bit of Brad Pitt but even Roland Emmerich’s films have more to offer in the way of interesting and sympathetic characters.

Because I don’t want to continue writing many paragraphs where I shame the film when it’s actually very enjoyable I will put my remaining negative thoughts in a bullet point list:

It seems that not many people are hugely excited for World War Z but you should be… kind of. The plot is tedious, the score is dramatic and the action is spectacular; what more could people want in a summertime zombie horde film? It’s a totally enjoyable dumb piece of action cinema. Way better than that Danny Boyle schlock.