Need for Speed
Aaron Paul leaves the epic small screen hit Breaking Bad to star in a film adapted from a computer game that, when I used to play at least, had no real plot beyond driving cars. Still, they promise to have not used any CGI so the stunts should be pretty.

The Zero Theorem
A mediocre offering from Terry Gilliam in which Christoph Waltz is suitably eccentric but not a lot actually happens. Read my attempt at a review here. “A great big shrug from me.”

Veronica Mars
Veronica Mars has crawled her way onto the big screen thanks to her fans shelling out to get a film made. We all know that I am excited, and enjoyed the cinematic outing, but will the film have an impact? With a UK cinema release numbering just 10 venues lets hope for a breakout success and expanded release. (Also out on Video on Demand today should you not be near one of the ten cinemas.)

Under the Skin
Scarlett Johansson is an extraterrestrial prowling Glasgow in a transit van searching for male prey that mostly consist of unsuspecting members of the public. This is art house science fiction that I have been known to claim “prioritises atmosphere and visuals (not just visual effects)”. The film is dead good and if you don’t like it then I reserve the right to peer down my nose at you over the top of my glasses.

The Stag
Irish bachelor party based comedy set in the great outdoors and starring loveable Jim Moriarty from Sherlock. I’m taking bets as to whether an actual stag (you know, one with antlers) shows up at some point.

The Rocket
A boy seeks to prove that he is not a bad luck charm by entering an ominous sounding Rocket Festival. I hope someone is there to advise him not to approach the rocket after it is lit and to put sparklers in a bucket of water like we all do… right guys?

Ironclad: Battle for Blood
Turns out that Ironclad was not only a film that existed but also a film that enough people saw for it to warrant a sequel. You learn so much writing these things.

Suzanne
“The story of a family and a love affair told through the journey of a young woman called Suzanne.”

Back to the Garden
“It is a year since the death of an inspirational theatre director and teacher, and his widow is struggling to come to terms with her loss. The film is both a meditation on love and loss and an evocation of the joys and sadnesses of later life.”

Plot for Peace
“A documentary that reveals the untold story of apartheid’s fall, and the mysterious French businessman who was instrumental in Nelson Mandela’s release from jail.” 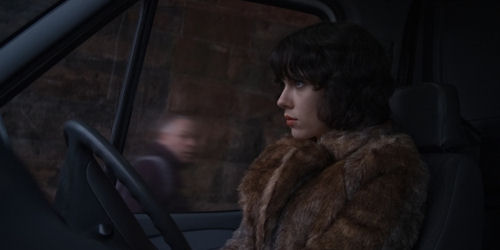 Under the Skin is not a film trying to make things easy on its audience so the synopsis I have come up with here is only as accurate as I can hope to get after just one viewing. Scarlett Johansson stars as an alien who has landed in Scotland and taken human form. In order to maintain her appearance she must kidnap and dissolve human beings she finds along her way.

Capturing human beings does not prove difficult for an alien with Scarlett Johansson’s face. In cheap clothes she drives around the streets in a white van asking for directions until she finds a man who won’t be missed and who is willing to follow her home. Once in her surreal home the men follow Johansson inside on the promise of sex but soon realise that lovemaking is not on the cards. The visuals involved in this act are sublime and surreal and I really don’t want to spoilt them for you. Suffice to say that this is low budget Sci-Fi at its best and the focus is on atmosphere and imagery rather than fancy gadgetry or boring exposition.

While the opening shot is reminiscent of 2001: A Space Odyssey, as we see some abstract shapes come together slowly to form an eye, the rest of the film has more of a The Man Who Fell to Earth feel about it though with much less dialogue and without being nearly so awful. The setting of the film is Scotland and we are mostly shown busy roads and foggy countryside rather than gleaming spaceships. All we ever see of anything resembling and alien craft is an expanse of either black or white space. If the devil is in the detail this sparse production design is positively heavenly.

At the heart of the film we are seeing our world through the eyes of an alien and the perception clearly is that we can be easily exploited through our greatest weakness – men’s desire for women. Johansson’s alien’s survival depends solely on the fact that men will find her beautiful and want to instantly have sex with her. The proof of the film’s concept is that not all the men involved were actors and that Johansson actually drove around Glasgow in the van, disguised by a short dark wig and English accent, and real men gladly got in with her. Man’s almost animalistic desire for sex is our downfall in Under the Skin and ultimately is what brings about the film’s conclusion.

A surreal and lyrical experience Under the Skin is not Sci-Fi for those who like space battle and explosions but for those who like a unique look at the human condition. This is very much Heavy Knitwear Science Fiction though a special brand that strips back even the dialogue and prioritises atmosphere and visuals (not just visual effects). Scarlett Johansson has clearly taken a risk in appearing in a British Sci-Fi film but it has most definitely paid off thanks to excellent work from director Jonathan Glazer.

Under the Skin does not yet have a UK release date. 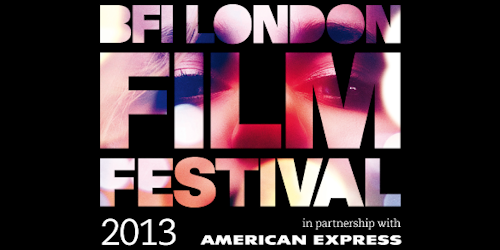 It’s that time again! Yesterday the line-up for the 57th BFI London Film Festival was announced to a lot of press that didn’t include ourselves. Last year’s festival was a lot of fun and I successfully saw more films than I could handle but there was no one film that got me properly excited like there had been in previous years. 2013 looks to be different.

A quick perusal of the festival brochure reveals a long list of films that I have been anxiously awaiting the arrival of from a number of writers, directors, and actors who are at the height of their game or at the beginning of what appear to be very promising careers. The line up for this year’s festival, running from 9th – 20th October, has got me properly excited and it looks like it will be easy for me to find enough films for me to finally break the 30 films in a festival barrier.

Below I have picked out ten films from the extensive list that the BFI are screening. What follows is far from an exhaustive list but rather is made up of films I have been waiting to see for a while or anything that caught my eye as I frantically scrolled through the festival brochure. My advise to you is to download the full brochure and give it a thorough read through so that you are ready when member’s booking opens on 12th September. Tickets go fast and some BFI members (ahem) are very quick with their keyboards.

Judi Dench stars as a Irish Catholic woman on the hunt for the son she gave up against her will more than fifty years ago. Steve Coogan is the jaded journalist who accompanies her on the journey in this film he co-wrote. Dench and Coogan are a double act I refuse to miss out on.

Alfonso Cuarón directs George Clooney and Sandra Bullock in a drama about a pair of astronauts whose space shuttle becomes damaged leaving the pair stranded and unable to contact earth. Lots of good buzz surrounding this film and it could well be only the second film after Life of Pi to use 3D properly.

Ralph Fiennes returns to the London Film Festival with his second feature as director in which he also takes a starring role. The focus of the film is on Charles Dickens and his secret love affair with a young actress played by Felicity Jones as she looks back on the affair later on in life. I think we all know why this film interests me.

Blue is the Warmest Colour

This year’s Palme d’Or winner is coming to London. A film about a love shared by two teenage girls that stirred up a lot of controversy in Cannes thanks to extended graphic sex scenes. Those scenes aside this film promises to be a tender look at young love that captures all its messiness and turbulence.

Early this week I was Googling The Double in the hopes that it was coming to UK cinema’s soon. I adored Richard Ayoade’s debut film Submarine and have been eagerly awaiting his follow-up ever since. Now we have it in the form of a film about a man who goes unnoticed at work until his exact double joins the company. Witty and romantic as only Ayoade can be.

Scarlett Johansson’s performance as an alien hunting for men in Glasgow has drawn a lot of praise and excitement in the past week. The film is described as “a brilliant amalgam of fantasy and reality” and from the sounds of it not all the men in the film who fall for the alien’s charms were aware they were in a film at the time. I’m baffled enough to be intrigued.

Daniel Radcliffe has come a long way since Harry Potter and has showcased his ability to act on TV and on stage. Now it’s time for his to prove himself on the big screen. Here he plays Allen Ginsberg in his first year at University as he meets fellow future heavyweights of the Beat Generation and embarks on a tumultuous affair.

Any film with Juno Temple in is worth a second look which is why this film finds its way into this list. Temple co-stars as a stripper who is taken into the home of a bored housewife played but the too often ignored Kathryn Hahn. Darkly funny and the debut film from a female writer/director this should not be a cheap or sleazy affair.

Much like Juno Temple, Felicity Jones, Judi Dench, Richard Ayoade, or Joseph Gordon-Levitt there is another artist whose work I find myself absolutely needing to see and that is Brie Larson. Too often resigned to the role of love interest or comic relief Larson is finally getting a proper meaty role as a supervisor at a foster-care home who finds herself having to deal with her own past as she helps a new resident with theirs.