It’s been a bit of a slow week, but dozens of mediocre films are coming out today. ‘Citing!

Devil
M. Night Shyamalan had the idea for this film but couldn’t be bothered to make it himself. People are stuck in a lift and one of them is the devil. Will it be any good? No. Will I see it regardless? Yes.

Ik Kudi Panjab Di
A very long Punjabi film about a women messing with the dominance of males. Or something.

Just Wright
A romantic comedy about a physical therapist falling in love with a basketball player. Yo.

The Kid
Brit flick about a kid growing up rough but turning out good. Based on a biopic of someone who may not be famous.

The Other Guys
These guys are so bad at being cops. Hilarious!

Winter’s Bone
Exceedingly well reviewed film about a girl’s journey to find her drug dealing father. Probably not a comedy.

The Horde (limited release)
A French horror about the fight between gangsters, police and zombies. Adding zombies and a foreign language makes all films more appealing.

I’m Still Here (limited release)
We finally get to see what may or may not have happened to Joaquin Phoenix last year while he happened to be filmed by Casey Affleck. All I know is he poos on someone’s face.

Night of Demons (limited release)
Flicked through the trailer to see a cheap looking horror set at a party with some nudity. Also some woman with tentacles. 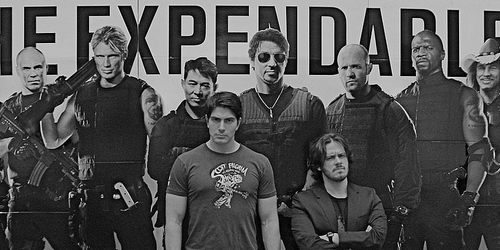 Let’s have a look at the weekend’s box office chart from the US.

Really America? We let you have the film first and you repay us by going to see The Expendables and Eat Pray Love!?

I am consoling myself with the knowledge that the phrase “From the director of Shaun of the Dead and Hot Fuzz” holds a lot more weight over here and that it will no doubt have an awesome DVD that will sell well. Besides, there won’t be a sequel anyway. My only concern is that if films like Scott Pilgrim, Kick Ass and Watchmen don’t do well in cinemas then we’re just going to have more and more mainstream comic book films and less originality.

I shake my fist at you America.