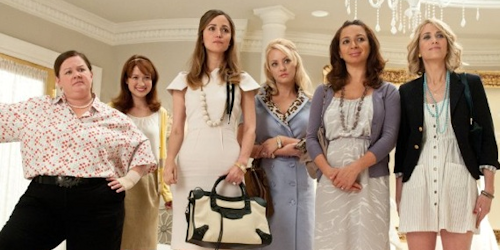 So many films out today it’s all a bit too much. If you make it to the end I will be impressed. Don’t forgot to enter our competition, there are DVDs at stake!

Bridesmaids
Kristen Wiig leads a brilliant female heavy cast in a comedy that puts The Hangover in its place. I presume.

Countdown To Zero
Documentary about the escalating nuclear arms race. Try not to freak out.

Incendies
Oscar-nominated French Canadian films about a pair of twins searching for their family history in the Middle East.

Talihina Sky: The Story of Kings of Leon
It’s a documentary about the Kings of Leon you idiot. Something to see while pretending you didn’t want to go to Glastonbury anyway.

World of the Dead: The Zombie Diaries (limited release)
Sequel to a British zombie film and nothing to do with either Land of the Dead or Diary of the Dead by George A. Romero.

Akira (limited release)
Classic anime as old as me. Not one for the kids unless they can handle sex and violence.

The First Grader (limited release)
In Kenya, an 84-year-old former freedom fighter fights for his right to education.

Viva Riva! (limited release)
The synopsis on IMDb is too long and confusing for me. Figure it out for yourself. One thing I can deduce is that this is a drama.

Love’s Kitchen (limited release)
Chef loses a wife, opens a restaurant and falls in love with a food critic. I just saved you your Saturday afternoon.