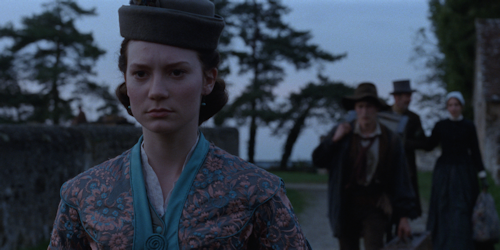 Growing up in a convent Emma (Mia Wasikowska) was always a little different from the other girls. Whatever she was supposed to be doing Emma would be doing her own way and dreaming of the day she could leave. Madame Bovary starts with Emma getting her wish and marrying country doctor Charles Bovary (Henry Lloyd-Hughes). In theory by becoming Madame Bovary Emma is setting off to live her dream life of luxury and excitement but the reality is much less glamorous. Charles turns out to live a simple life in a modest house with a single servant. He is a kind man but dull and unambitious. While Emma yearns for the bustle of the city Charles is quite content to live out his quiet life in the countryside. Left alone in the house for most of the day Emma soon finds herself becoming less the grateful wife and succumbing to the dual temptations of material goods and extramarital romance.

Emma’s life is lived through the visitors she receives at her house and one of the more frequent faces she sees is Monsieur Lheureux (Rhys Ifans). Lheureux is a merchant who offers to sell Emma her every heart’s desire. From furniture to clothes and from jewellery to silverware there is nothing that Lheureux will not supply the Bovary couple and he happily allows Emma to rack up a mountain of debt. Another face who regularly pops by is Leon Dupuis (Ezra Miller) a young aspiring adventurer. Leon takes a shine to Emma and though she rejects his romantic advances he reawakens her sense of adventure and before the story is told Emma has taken her fair share of lovers. From a humble upbringing Emma learns to live a life of decadence and self-indulgence at the expense of her mild-mannered husband. Naturally Emma can only spend money she doesn’t have, and toy with the hearts of many, for so long before her life starts to unravel around her.

Much like the titular character Madame Bovary is beautifully presented but mostly empty on the inside. The costume and set designs are sumptuous, detailed, and presumably accurate and the film as a whole is greatly aesthetically pleasing. The acting, led by the always impressive Mia Wasikowska, is top-notch and everyone involved throws themselves into their roles with gusto. The ingredients are all there but the end result is somehow unsatisfying. While being a relatively enjoyable film Madame Bovary never quite manages to find its stride and events seem to plod on rather than move forward. Even when the situation becomes dire for our protagonist it is hard to sympathise because not one of the characters are especially sympathetic.

Emma is a selfish young woman who comes across as spoiled and ungrateful, Lheureux is a greedy, manipulative, and selfish man, and Emma’s various lovers are heartless and weak in equal measure. The only character who might stir up sympathy in the audience is poor Charles Bovary but the wet small town doctor is portrayed as pathetic enough to not really warrant our support. With nobody to root for the stakes never rise and the outcome of the film is difficult to care about. Despite the best efforts from a quality cast the script from Felipe Marino and director Sophie Barthes doesn’t put enough meat on the bones of the story. Though enjoyable enough I just didn’t care about what was going down on-screen.

Madame Bovary is a lack-lustre period drama that is less than the sum of its parts. While I must admit to being unfamiliar with the source text this adaptation leaves solid performances lost in a bland melodrama.

Madame Bovary has no UK release date yet.

Until recently we’d only had a single glance at Andrew Garfield’s lycra-clad superhero. Thankfully they didn’t wait until Comic Con to release new pictures from The Amazing Spider-Man, instead giving the scoop to Entertainment Weekly.

In the images below we get our first look at the entire cast, each of whom has proven themselves as quality actors above all else. It does help that they’re darn good-looking though:

See! Emma Stone and Andrew Garfield are a couple you can really root for, sorry Dunst and Maguire but upside-down kissing is out. END_OF_DOCUMENT_TOKEN_TO_BE_REPLACED

Take a look at that cast; Andrew Garfield, Emma Stone and Rhys Ifans. Now throw in Marc Webb as director.

When did Spiderman go from being yet another ill-advised reboot and become something potentially awesome?

I dare this film to be bad.