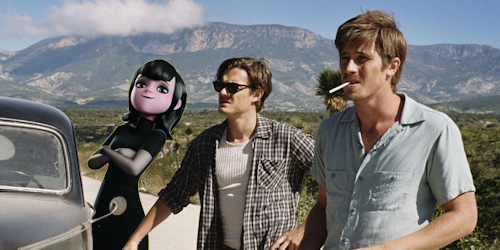 Hotel Transylvania
Dracula, now running a hotel, suffers every undead father’s worst nightmare when a young human boy discovers the hotel and falls in love with his daughter. Were this not an animated children’s film the boy would be dead within minutes.

Pusher
Jeff from Coupling looking suspiciously like Andy Serkis plays a drug dealer whose life goes awry due to him being a drug dealer and hence working in an industry fraught with peril. The trailer makes this look quite good but then trailers can be deceptive bastards.

Ruby Sparks
A struggling author accidentally writes his dream girl into existence. Much more substance than Stranger than Fiction, Ruby Sparks is dark, funny, and deep. I liked it.

Hit and Run
“Former getaway driver Charlie Bronson jeopardizes his Witness Protection Plan identity in order to help his girlfriend get to Los Angeles. The feds and Charlie’s former gang chase them on the road.” A road trip chase comedy with pretty poor reviews.

On the Road (limited release)
Road trip movie #2. Adaptation of Jack Kerouac’s cult free-wheeling novel that is potentially unfilmable. All anyone seems to care about is that Twilight‘s Bella turns up in a small role in which she does adult things to two men at one. In a car. While one of them is driving. What would Edward think!?

Private Peaceful (limited release)
“Set in the fields of Devon and the WWI battlefields of Flanders, two brothers fall for the same girl while contending with the pressures of their feudal family life, the war, and the price of courage and cowardice.” In a wartime drama the main characters’ surnames are Peaceful. Subtle.

Radioman (limited release)
Documentary about a former homeless man in New York City who has made cameo appearances on over 100 films and TV shows. This guy needs to update his IMDb page, he could bring Six Degrees of Kevin Bacon to its knees.