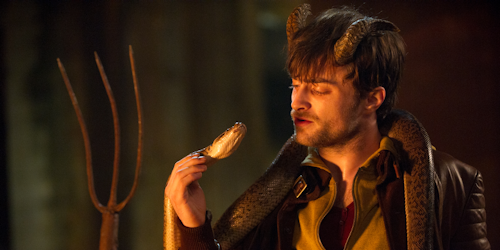 Multiple films worth seeing this week. I do love autumn and the overall improvement in film quality it brings.

Horns
Daniel Radcliffe plays a young man who starts to turn into the devil shortly after his girlfriend (Juno Temple) is found murdered. Reviews might be mixed but both Radcliffe and Temple make interesting film choices so I am still interested.

Nightcrawler
Jake Gyllenhaal had performed the dramatic weight loss now standard for an actor tackled something a little different to what they are known for. Here he is a hands on crime journalist; a professional rubbernecker with no moral compass. This looks fantastic.

Extraterrestrial
Canadian horror in which friends in a cabin in the woods find themselves attacked by aliens. Gore, violence, and swears abound.

The Necessary Death of Charlie Countryman
Shia LaBeouf stars. I’m not sure I can handle that.

Mr. Turner
Everyone with an opinion is agreed that Mike Leigh’s biopic starring Timothy Spall as the great painter is absolutely tops. This will be going in my eyes and ears this week.

The Overnighters
Documentary about workers in North Dakota oil fields. Migrants swarm into a small town during a small oil boom and are forced to sleep in the local church to the disapproval of nearby residents.

Invasion of the Body Snatchers
Not the 1978 version I know and love starring Sutherland, Goldblum, and Nimoy but the 1956 original. A more black and white PG affair but still involving aliens replacing humans with identical copies.

The Guarantee
“On the night of September 29, 2008, the Irish government decided to guarantee the entire domestic banking system. The Guarantee tells the story of that night, and what led to it.”