In the future time travel has not been invented, in the future’s future it has. Naturally the technology has been made illegal and is only used as part of organised crime. Mob bosses send targets back in time to be killed by assassins known as Loopers. A Looper lives a life of luxury and excess thanks to each victim travelling back in time with four gold bars strapped to their back. A Looper is released from their contract when they complete their Loop and the mob sends their future self back to be killed. Joseph Gordon-Levitt plays Joe, a Looper who comes a cropper when his future self (Bruce Willis) arrives and goes on the run.

And this is where my review falls apart. There is so much complexity beyond the initial set-up that has left my mind reeling for the past four days but none of it can be discussed in a spoiler-free review. The marketing for Looper has cleverly kept a whole farm/child based part of the plot completely under wraps and I’m not going to go ruining that here.

As a result Looper is a rare example of a film in which you do not know how it will end, nor for that matter what is going to happen in the very next scene. Apart from being gorgeous and clever (much like the team here at Mild Concern) Looper is surprising in the avenues it take you down as it explores love, self-sacrifice, and the importance of good parenting.

Rian Johnson may have lost some of the visual flair he had back in the days of Brick but this is still a stunning film and he has created a fully realised and thoroughly lived-in futuristic world. For every hover bike there are a dozen old cars with solar panels clumsily strapped to the roof. Joseph Gordon-Levitt and Bruce Willis are fantastically matched as opposite sides of the same coin and the facial prosthetics were nowhere near as distracting as I’d feared. Noah Segan, Jeff Daniels, and Emily Blunt are great too but all are outshone by Pierce Gagnon, a young boy in a pivotal role that I refuse to discuss.

Time travel films will never fully make sense but, as Willis tells us near the start of Looper, it really isn’t worth bothering about. This film shows that sci-fi and action can be both clever and fun and don’t have to involve a climactic battle at a ski resort for no reason (I’m looking at you Inception). 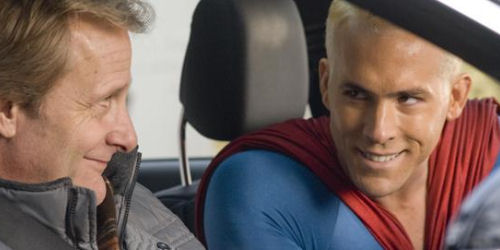 Out of nowhere comes a trailer for a film I’ve never heard of but instantly want to see. The film is Paper Heart starring Jeff Daniels as a writer with an imaginary friend, Ryan Reynolds, who befriends a teenager played by Emma Stone. Lisa Kudrow is also knocking about and as anyone who has seen The Comeback knows she can do way more than Pheobe Buffay.

The cast excites me and the film looks like intriguing indie fun.

The bad news is that while Paper Man has an American release this month it isn’t scheduled to come out in the UK yet. Hopefully like Whip It and Brothers Bloom it will eventually find its way over here.