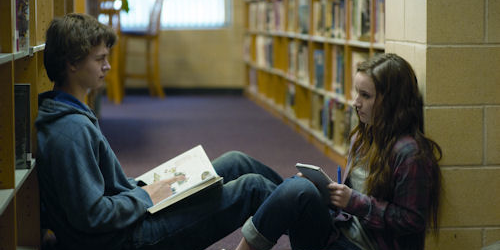 Jason Reitman’s directorial career was going so well. His first four films from Thank You for Smoking to Young Adult were each remarkable in their own way and it seemed that he could not put a foot wrong. And then he did. Earlier this year saw the release of Labor Day; an out of character romantic drama that showed Reitman trying something a little different and failing in the process. This year he returned to the London Film Festival with a new contemporary family drama Men, Women & Children. The question this film had to answer was, has Jason Reitman got his groove back?

In Men, Women & Children men, women, and children (I’m for the Oxford comma) find their personal relationships sabotaged by an over reliance on technology. Jennifer Garner* is a neurotic mother who monitors her daughter’s every move online, even going so far as to delete messages before they reach her. Her daughter Kaitlyn Dever feels oppressed and uses a secret Tumblr account as her only outlet while starting a sweet offline romance with Ansel Elgort. Ansel has abandoned the school football team in favour of playing online computer games after his mother abandoned him and his dad, Dean Norris, and became more a Facebook friend than a parent. When not worrying about his son Dean is flirting with Judy Greer who manages a questionable modelling website for her celebrity-in-waiting daughter, Olivia Crocicchia. Olivia meanwhile is sexting high school jock Travis Tope who is struggling to find real sex appealing having become addicted to a particular strand of porn. Travis’ parents Adam Sandler and Rosemarie DeWitt are failing to connect and so are contemplating exploring online escorts and extramarital affair sites respectively. If that weren’t nearly enough we also have Elena Kampouris who visits thinspiration websites and suffers from anorexia and low self-esteem but she doesn’t fit as neatly into the chain of relationships as everyone else.

As you can tell from the above there is a lot going on in Men, Women & Children and every storyline involves someone’s life being worse off thanks to the internet. An ensemble drama can work but only when dealt with carefully. In this case the fact that a small group of interlinked individuals are all experiencing some form of cyber woe makes the whole exercise feel inauthentic and implausible. Now might well be the prime time for a film exploring the internet’s effects on human relationships but this heavy-handed attempt at highlighting the possible dangers online is not that film. Jason Reitman wants you to reflect on how you are damaging your own relationships and he will beat you round the head with an iPad until you do. Few films are this preachy and condescending which, having now sat through this public service announcement of a film, is a great relief.

There are moments of charm and humour but they are lost in amongst the endless scenes of characters making bad choices because their modems made them do it. Men, Women & Children is not about the real world or real people. It is Reefer Madness for the internet age and is every bit as overblown and undercooked. In an attempt to add levity to proceedings Reitman has added narration courtesy of Emma Thompson in the hopes that her accent describing sex acts will be enough to soften the rough edges of this melodramatic catastrophe. Sadly even Thompson’s authoritative voice can’t distract from the mess Reitman has made.

No character is given enough screen time to become fully rounded and nearly everyone involved at some point does something so utterly stupid and unrelatable that the audience is left floundering looking for someone to relate to. The minute you think you have found your cypher to guide you through Men, Women & Children they will do something unforgivable or seemingly without motive. The film is unlikely to stop anyone from going online but may well turn people away from going to the cinema again.

Men, Women & Children is misogynist, paranoid, and pretentious. Jason Reitman can do so much better.

*There are too many characters for me to have remembered any names.

Jason Reitman made his name making high quality comedy dramas and Labor Day marks something of a departure for him as not only is it his first period film but also, in my opinion at least, is his first out-and-out drama. It is 1987 and an escaped convict (Josh Brolin) takes refuge in the house of a single mother (Kate Winslet) and her only son (Gattlin Griffith). He initially is holding mother and son against their will but as the long weekend passes he becomes less of a kidnapper and more of a refugee as he takes on the role of husband and father that both are missing from their lives.

Reitman is clearly trying to make something a little different to his normal fare here but is doing so in such a self-conscious way that I think he gets a little lost. Scenes within the house are so po-faced it is hard to take them seriously. Josh Brolin may be playing an escaped convict but he plays him as such a gentle giant, such a caring and considerate man, that it is hard to see why he would have escaped from jail in the first place rather than continue to serve his time. Winslet’s sad divorcee is a fragile creature and it is not hard to see why she might start to develop feelings for her kidnapper but the combination of her need for a saviour and his deliberate saviour-like qualities seems a little forced. Clark Gregg plays the ex-husband and father as a sweet and caring man who is perhaps a little bland thanks to limited characterisation. Again it is not obvious why we should see him as being so inadequate in the role of father for an escaped criminal to seem like a viable option. It is as though a particular outcome for the film was sought and so characters were written to suit.

The real star of the film is Gattlin Griffith as the son Henry. It is through his eyes we see this whole ordeal and maybe this is why some of the characters come across as caricatures. Griffith is very much viewing the film along with the audience as I don’t think either of us could ever quite decide if we wanted Brolin to get caught or not.

Jason Reitman has made a quality film with plenty of beautiful images and a raft of strong performances. The film is almost a tactile experience and has such a fully realised setting I felt like I could reach out and feel the roughness of the furniture or taste the peach pie. Where the films struggles is how seriously it takes itself considering its slightly implausible plot. At various times in the film I was incredulous when I realised that only two days had passed when the amount of change in the characters’ relationships would have requited much, much longer. It was a relief when the few scenes set outside the house brought with them laughter and I could take a breath as the story within the house wasn’t going to allow for any smiles unless you were considering how wondering Josh Brolin’s convict was as a family man.

Labor Day (Labour Day?) is a good film if a little too laboured (HA!) to be believable.

Labor Day screens at the festival on the 15th and 19th October and is in UK cinemas on 7th February 2014.

Up in the Air begins with memorable opening titles and continues to impress, after a slightly slow start, until the horrendous fan-made song wailing out over the closing credits. George Clooney shows a rare vulnerability as corporate assassin Ryan Bingham and is ably supported by Vera Farmiga and Anna Kendrick whose characters together take Bingham on an emotional journey throughout the offices and hotels of America.

In a year lacking in great films you can smell award nominations for those involved; the cast and for Jason Reitman who continues to improve with each film. Juno is soon to be replaced as Reitman’s signature work.

Up in the Air takes you from moments of raucous laughter to the edge of tears and pulls no punches in providing an ending I honestly did not expect, yet which made sense, a true merit to any film that can achieve it. Much like its characters this film is not without its flaws but you will be more than happy to spend an hour or two in its company, just make a dash for the exit as the credits start or suffer the lyrical consequences.