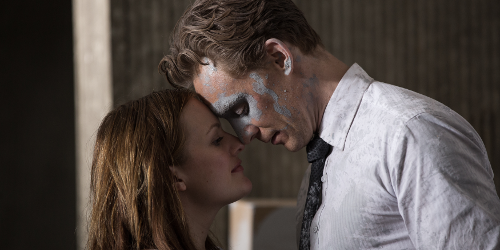 What do I even say about High-Rise? Everything about this film is so distinct and unique it defies description or definition. It is a unique entity and so is hard to line up and compare against all other films. I’ll do my best for you.

In a slightly askew version of London in 1975 Robert Laing (Tom Hiddleston) moves into a modern concrete high-rise. Inside he meets all manner of unusual character brought to life by an impressive cast list you’re better off finding on IMDb than me typing out here. The tower has everything a resident might need from a swimming pool to a market and Laing soon realises it has its own social structure too. On the lower floors live the families and poorer residents while at the top reside the wealthier residents and local celebrities. In the penthouse Laing finds the building’s visionary architect Anthony Royal (Jeremy Irons).

All is well, if a little surreal, for a short while but before long a riot/party/social uprising begins and all hell breaks loose. In a surreal manner naturally. By this point in the film I entered an almost dreamlike state in which I felt like I was watching the film through a haze. Could this have been down to it only being 3pm and my watching my third film of the day or was I being elevated to a higher plane through cinema? I’ll let you decide.

The combination of screenwriter Amy Jump, here adapting J.G. Ballard’s novel, and director Ben Wheatley once again produce a unique beast. Not only is it different from all the other films at last year’s film festival but distinct from everything their collaboration has produced before. The tone veers wildly, and sublimely, from comedy to horror to drama. This is the film you expect Ayoade or Gilliam to make and yet the result is distinctly Wheatley.

And the set! The set is that of a gorgeously brutalist tower block with, presumably fake, cast concrete inside and out. Having recently toured the Southbank Centre as part of a celebration of brutalism I feel especially qualified to say the set design was top-notch; both bleak and beautiful as life in London so often is.

I have pages of notes with various thoughts and comments on the film but on reflection I can’t help but feel that sharing these would you might take away from the surprise and delight that High-Rise has in store for you. You will laugh, you will wince, you will marvel at the almost naked sight of Tom Hiddleston. If there’s one film you need to see to stay relevant at a cinephiles dinner party, this is it.

It’s like Snowpiercer but vertical. I loved it more than I understood it.

I will admit that the film did lose me at times but for sheer no hold barred inventiveness I can’t withhold a single star.

High-Rise is out in UK cinemas now and I dare you not to watch.