We’ve all seen films like Trumbo a dozen times. Glossy Hollywood films about America’s past that talk of some shameful part of their history but do so in a way that is very clean and safe. These are films that are good but not great. These films give actors scenery to chew but give the audiences nothing to remember by the end. Trumbo opens as Suffragette does; with white text on a black background setting the scene and with slow fades in between. The subtext here is that what you are watching is important and so should be instantly respected and eventually rewarded with golden statues come awards season.

Dalton Trumbo (Bryan Cranston) is a screenwriter and a communist at a time in America when being a communist would soon get you called in front of congress and banned from working for any major studio. Trumbo was, so we are told, the greatest screenwriter of his generation. The film covers decades of Trumbo’s life as he goes from his career peak to being put on the Hollywood blacklist and then fighting to continue writing to support his family and show that without the communists there would be no screenplays.

This is not the proudest chapter in America’s story so it at first glance seems like a brave and worthwhile film to make. Sadly the film that has been produced is simultaneously theatrical and mundane. That’s not to say it hasn’t been made without skill. Every set and costume is made to exacting period detail and every scene is littered with witty one liners and the best in supporting character actors. John Goodman, Alan Tudyk, and Louis C.K. are particularly enjoyable but eventually the short functional scenes in which someone delivers some exposition and another counters with a quip become tiresome. Elle Fanning is particularly good as Trumbo’s daughter as she brings probably the only human element to the film while Diane Lane as Trumbo’s wife is life to just smile from the sidelines.

As for Cranston himself; he brings to mind part of what made Breaking Bad so great, but in the worst way. What Cranston could do so well was make it clear when his character Walter White was himself acting. His performance there had to layers; a level of artifice on top of the real character he was playing. Sadly in Trumbo we only get the top layer of pretending as if Cranston is playing an actor playing Trumbo. It is all caricature and no character. The result of this is that when bad things happen to Trumbo you don’t care as much as you should and you are infinitely aware that you are not watching something real. This film does not immerse you in its world but keeps you at arms reach.

Trumbo is not a bad film. Yes it could lose 30 minutes from its runtime but the film is certainly enjoyable and had me chuckling throughout. The story itself is also interesting but once the film was done no part of it was racing through my head the way the best films do. With films like Trumbo about an important subject the films themselves want to be treated as important. As Trumbo finished it was begging for applause and some of the press audience dutifully applauded but frankly it didn’t really deserve it. Just because a film is about admirable people doesn’t make that film automatically admirable itself.

Trumbo is in cinemas now. 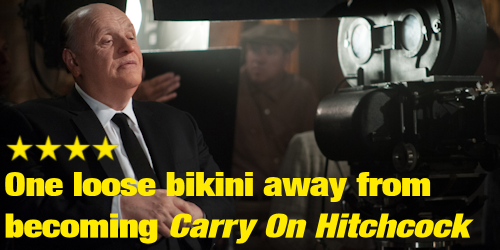 Over Christmas the BBC decided to celebrate the great Alfred Hitchcock by screening some of his films, including the wonderful Rebecca, and co-producing drama The Girl which portrayed Hitchcock as an abusive sex pest as he directed Tippy Hedren in The Birds. The Girl was a fantastic piece of drama with Toby Jones giving a deep performance as Hitchcock and the film taking a strong, if not necessarily accurate, stance on the type of man Hitchcock was.

Now in cinemas we have Hitchcock which takes place just before The Girl as Hitch (“hold the cock”) tackles his new production of Psycho against the advice of everyone but his long-suffering wife Alma (Helen Mirren). In contrast to the sinister tone of the BBC’s effort Hitchcock has a more jovial atmosphere. Anthony Hopkins plays Hitch with his tongue in his cheek and seems to be aiming more for caricature than for character. The film opens with Hopkins addressing the camera in the style of Hitchcock and this nicely sets the audiences expectations for the rest of the film.

While the main plot is concerned with the less than smooth production of Psycho the more interesting story at play here is the relationship between Alma and Alfred, something that was far from the spotlight in The Girl. As Hitchcock becomes engrossed in his new film, and new muse Janet Leigh (Scarlett Johansson giving her best performance in a good few years), Alma cheats on him in the worst way possible; by helping to adapt a script for another man. Mirren and Hopkins make for a great dysfunctional couple; much as they may fight there’s an underlying love that breaks through. In a film with little authenticity it offers a glimpse of genuine tenderness.

Where Hitchcock goes slightly astray is in its fantasy sequences involving Ed Gein, the psycho who inspired the novel Psycho which inspired the film Psycho (which later inspired the Gus Van Sant remake Psycho). While the rest of the film is one loose bikini away from becoming Carry On Hitchcock these brief interludes are closer to Carrie than Carry On. Hitchcock dreams about talking to Gein and even starts fantasising about using the psycho as a psychotherapist. The scenes are jarring and have no real impact on the rest of the film so are a bizarre inclusion.

Hitchcock does not fare well from direct comparison with The Girl lacking as it does the dramatic weight, distinct message, and flawless acting of the latter. A direct comparison isn’t exactly helpful though as they are two different beast. The characters involved may share names but they do not share personalities and neither do the films; one is most certainly a drama and the other more of a comedy. The two films can contradict each other and still co-exist.

For my money Hitchcock is just as valid as The Girl; it is less enthralling but makes up for it in entertainment value. 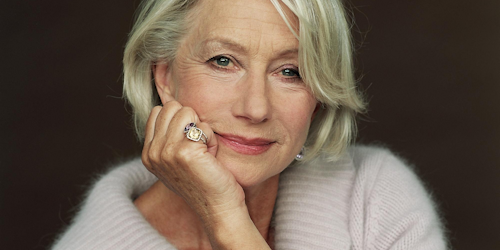 For no good reason, and without watching any new films with her in, my vague dislike for Helen Mirren is fading.

I thought you all should know.

The Surprise Film is consistently the hottest ticket at the London Film Festival, previous years having included The Wrestler and No Country For Old Men, and after last year’s disappointment with Capitalism: A Love Story a real treat was expected last Sunday.

Somehow the internet decided that the surprise film was most likely Brighton Rock, but this was by no means guaranteed… until the opening credits rolled. What followed did not match the Coen Brothers, Aronofsky or even Michael Moore.

Brighton Rock is everything I was so pleased Submarine was not; a gritty, gangster filled period film with Helen Mirren. In theory the film followed the descent of young rogue Pinkie into organised crime and disaster, when in reality his arc ended after about twenty minutes and then failed to progress for the final hour and a half.

To say that Brighton Rock is terrible would be an exaggeration, it would make a fine addition to any ITV drama line-up. Sadly the film is simply unimpressive and a far cry from the quality you expect to be shown in what is one of the Festival’s top four events. Rather than creating huge hype, the screening felt like a trick, making people buy tickets for a film they would never have shelled out for had they known what they were getting themselves into.

After a rough start Brighton Rock does get better, though never quite finds a way of connecting with its audience and struggles to develop any character beyond their two dimensions. Considering Rowan Joffe, the writer/director, also penned The American he is responsible for more than his fair share of flops for one film festival.

Brighton Rock does not have a UK release yet, and after the backlash it has received this week it could be a good thing.

So many trailers I want to share with you there no time to get into details. We’ll start with The Tempest which has been waiting for release for a year and still hasn’t got a UK date yet. I’m excited because of felicity Jones and wary because of Helen Mirren.

Next up Burke and Hare the new John Landis comedy starring SImon Pegg and Andy Serkis, looks fun if a little slapstick. END_OF_DOCUMENT_TOKEN_TO_BE_REPLACED