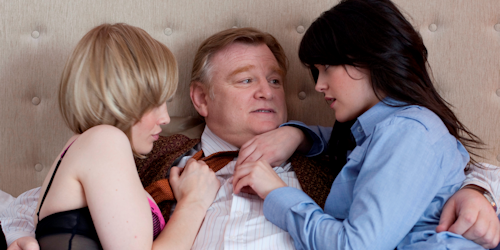 This week we have one real treat, sadly on limited release, two shameless cash-ins and some other films I’m about to Google.

Spy Kids: All the Time in the World in 4D
After three films the original Spy Kids are all grown up and return to pass the mantle to two new little brats. On the plus side there’s Joel McHale, on the downside you get a scratch-and-sniff card. The last time I had one of those I was at a panto.

Kind Hearts and Coronets
Classic comedy starring Alec Guinness in eight roles as a Duke’s relative kills everyone in the line of succession before him. One of the greatest British films of all time according to the BFI, don’t miss it.

Villain
Google is terrible for this film but we have our ways. Two loners fall in love online and then go on the run after the guy is suspected of murder. Things get revealed as plot unfolds. Hey look, a trailer.

Glee: The 3D Concert Movie
After failing to break into the top ten at the US box office, it will be interesting to see how the film does here. Other than that I have nothing more to say. Sue Sylvester isn’t even in it.

In a Better World (limited release)
“The lives of two Danish families cross each other, and an extraordinary but risky friendship comes into bud. But loneliness, frailty and sorrow lie in wait.” Also… “violent and disturbing content some involving preteens.” Crikey.

The Guard (limited release)
We saved the best for last. This film is fantastic, go and see it if your local cinema has enough taste to be playing it. Brendan Gleeson plays an unconventional policeman in a genuinely funny crime comedy.