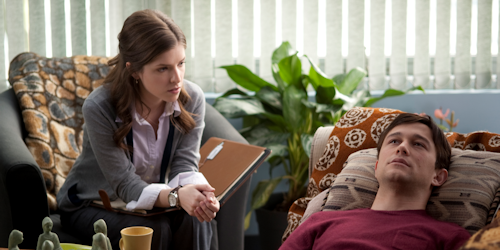 Joseph Gordon-Levitt is Adam, a man in his later twenties who is diagnosed with a rare form of cancer with a 50% survival rate. 50/50 follows Adam as he undergoes treatment and struggles to maintain relationships with his best friend (Seth Rogan), girlfriend (Bryce Dallas Howard), his mother (Anjelica Huston) and his therapist (Anna Kendrick).

Will Reiser had a tricky task in writing a cancer comedy, the drama and comedy have to be carefully balanced to avoid either trivialising the disease or smothering the humour. Luckily Reiser trod this line well and has written a film that had me both laughing out loud and fighting back the tears.

Joseph Gordon-Levitt is responsible for the majority of the drama, forced to carry the weight of the film as he portrays a man facing potential death and struggling through debilitating treatment while not believing he is receiving the necessary support from his loved ones. Adam is not completely devoid of comedy but is certainly where the drama is centred.

To keep the film from edging into too bleak a territory, Seth Rogan, Anna Kendrick and Anjelica Huston use their supporting roles to bring in the laughs, while each sharing a touching moment with Adam along the way; with a two-handed genre no cast member is left as just the comic relief. This is a great cast with solid material to perform so there is nowhere for the film to go wrong.

Some may find the shifts in tone a little hard to swallow but for me director Jonathan Levine has done a good job at seamlessly blending the genres. Levine gets bonus points for a few visual flares courtesy of two clever uses of shifting focus, which is just what you’re looking for in a comedy, I’m sure.

In short, a moving and hilarious film about living with cancer. Who knew a Seth Rogan project would almost make me cry? 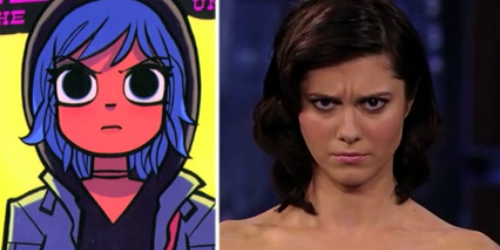 Because Monday’s post took a lot of work and was one of our least popular ever I felt the need to follow it up with three more things to do to pass the time before we get Scott Pilgrim in cinemas.

8. Watch the Cast Do Hundred of Interviews on Youtube

Thanks to the film being so close to being released over in the United States Micheal Cera, Mary Elizabeth Winstead, Jason Schwartzmann and Anna Kendrick are doing the rounds on US talk shows. Worth it just to see Winstead trying to match Ramona’s expression.

The world’s movie blog with the worst tagline has the first clip from an animated short of Scott Pilgrim from Adult Swim. The short details some of Scott earlier days that were featured in the comics but didn’t make the film. Cera plays Scott while Whitman and Schwartzmann play different roles to their characters from the film. It’ll be on TV on the 12th so expect it online soon after.

Another one for those of the London disposition. On Tuesday 17th August at the BFI Southbank Joe Cornish will be interviewing Edgar Wright about his career to date and looking into the future. Expect some Antman revelations and maybe a clip or two from his career so far.

Guaranteed this post will get less hits than the time I pretended Edgar was having an affair with a man.