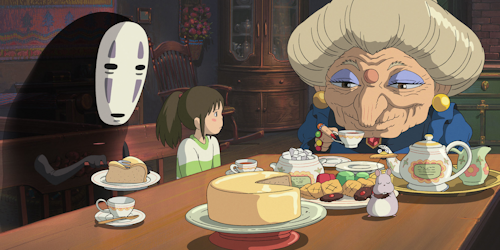 Today is a notable day for fans of Hayao Miyazaki and Studio Ghibli as it brings forth the beloved Japanese animation Spirited Away on Blu-ray in the UK. I was lucky enough to give the disc a spin in advance and what follows are words written by me after watching said disc.

Spirited Away is a charming and beautiful masterpiece with a wild imagination capable of bringing delight to all ages and plenty of lessons for impressionable young minds to benefit from. The hero of the story is a 10-year-old girl, Chihiro, who stumbles into the spirit world while travelling to a new home with her parents. Alone in a reality populated by witches, monsters, and ghosts Chihiro must find the strength within herself to move forward and forge her own identity. The plot is littered with metaphors touching on environmental, political, and psychological issues but rest assured if you aren’t willing to look too deep everything looks pretty too.

The transfer to Blu-ray looks stunning with lovely legible subtitles, vibrant colours, and crisp lines. The disc comes with the option of Japanese or American dialogue and while everyone has their opinion on what is the better option I do not have the energy to argue the case either way. Thankfully both English subtitles and audio have been assembled with care so you can’t go wrong. And if you speak Japanese then you needn’t trouble yourself with all this petty squabbling.

In short; Spirited Away is the greatest and looks sexy in high-definition.

Extras
I hit Play All on the extras so as to be able to give you a comprehensive review then immediately skipped past the first feature on offer. The Blu-ray allows you to watch the entire film with the original storyboards overlayed in the top right hand corner for comparison. This is interesting to see, I am sure you will agree, but perhaps a feature to dip into rather than watch for the full running time. I smiled appreciatively and then skipped away.

What I watched next makes up the bulk of the extras on the disc and is a documentary made for Japanese television about the production of Spirited Away. The image quality is less than high-definition, stark contrast to the film itself, but what this extra lacks in pixels it makes up for in behind the scenes insight. The documentary introduces the story of the film and how Miyazaki was inspired to write it by a friend’s 10-year-old daughter who became the template for Chihiro. We get to see Miyazaki himself hard at work briefing and inspiring his animators; often seen poring over drawings with a cigarette in hand.

It is fascinating to see inside the animation studio as it resembles any regular office filled with cluttered desks and overworked employees. Pixar may be filled with individual animators’ offices decorated in wacky fun ways but Studio Ghibli is much more basic. What comes across between the animators is a sense of community and a desire to work hard to get the film, which was running behind schedule, finished on time. We are also shown what happens in the recording of the dialogue, background noises, and musical elements. The dialogue recording in particular makes working on a Ghibli film seem like lots of fun and surprisingly low-tech. At the end I got the feeling that Spirited Away was affectionately handmade; metaphorically and literally. Not often that features make you love a film all the more.

I will admit to skipping the next set of special features as they consisted of the original Japanese trailers for the film and there were eight of them. I cannot only indulge you guys so far I am afraid.

The remaining three features surround John Lasseter. A big wig over at Disney and Pixar Lasseter provides an introduction to the film and later introduces us to Miyazaki. Neither of these feel necessary or sincere. Of more interest is a mini-feature on the American re-dubbing of the film as we see actors having to deliver dialogue at the right pace to match the speaking pattern of a totally different language. What was most interesting about this feature was how polished and false the cast and crew came across when interviewed compared to the unguarded authentic feeling their Japanese counterparts had given earlier on.

There are plenty of extras here but I would advise that you only really need to give your time over to the full Making Of; the rest is mostly filler.

Spirited Away is on Blu-ray & DVD

in the UK right now.

One thought on “Spirited Away – Blu-ray Review”