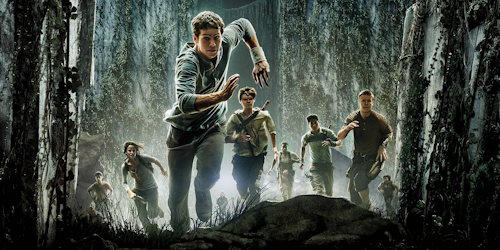 Hello and welcome to “Not Another Teen Dystopia”. Today’s guest is The Maze Runner, the newest adaptation from the world of young adult fiction to graduate to the silver screen. After the Harry Potter and Twilight dynasties retired, it’s been open season for hunting the teen fantasy market, and as a result we’ve suffered all manner of teen-skewed releases, each less identifiable than the last as the pool grows wider and the averages lower. The Maze Runner doesn’t exist in a vacuum, but it leans away from what makes its contemporaries blend into each other. It doesn’t stand out, it falls out.

The first half features run-of-the-mill world-building that is necessary to set up the franchise for a lucrative future. We are thrust into “The Glade” alongside its latest inhabitant or “greenie” Thomas. In their community of teenage boys, amnesia is a prerequisite – a sly bit of storytelling which allows for constant doses of exposition without having to slow the story down. No-one knows how they ended up in their square meadow prison, but each month a new greenie is sent to them. Any more background runs the risk of spoiling the thrill of the film because The Maze Runner thrives on telling the audience barely enough to explain itself. It’s claustrophobic, hurried, and tense by design with testosterone driven alpha male political struggles within the Gladers.

The action flows fast once the world is set up and the boys of the Glade are set in their roles enough to take on the maze, which is inhabited by murderous bio-mechanical sentries. Back in the Glade, the society is strictly defined. There’s the angry traditionalist Gally (Will Poulter) and the builders, the runners who map the shifting labyrinth of the maze, fresh-faced children, doctors and diplomatic leaders. Everything’s holding nicely (apart from the hundred foot high brick walls surrounding them) until the balance is shifted further by the arrival of some feminine energy in Teresa (Kaya Scodelario), and the Gladers head into the maze.

Once you sideline the ridiculous mythological overtones of the constructed maze and the Lord Of The Flies social drama angle, the obstacles start piling up behind the enjoyable action sequences once our heroes leave the Glade. The score, by John Paesano, is emotion-by-numbers and undeniably annoying as it looms over the actors and some powerful performances, especially Aml Ameen and Thomas Brodie-Sangster. As dystopias go it’s action over politics, explosions over social commentary, but director Wes Ball hoists the film around wherever possible to up the action ante and there’s a tantalising finish that’ll be the main takeaway from a certified money-spinner. Although it’s best seen with no prior information, the tension balances out the action and fulfils the purpose of the film; to set up the franchise.

The Maze Runner is in UK cinemas from 10th October.

For more from Peter visit his website at roomtoreview.co.uk