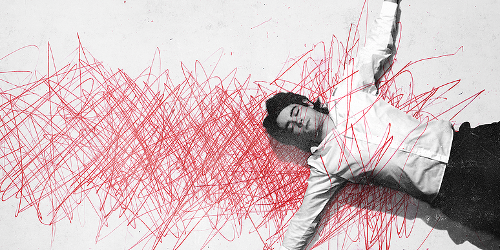 A decade ago the idea of making a film entirely on green screen with computer generated sets was making headlines with the release of the wobbly Sky Captain and the World of Tomorrow and the audience-pleasing Sin City. The green screen technique was being used to create a world that was stylised to such a degree that conventional filming techniques would be too costly and insufficient. And so it is with The Knife That Killed Me, an upcoming film in which a teenager reflects on the tragic events that lead to the end of his life as adapted from the novel of the same name

by Anthony McGowan. The fantastical world the green screen was needed to create?

Or at least a variation of the Yorkshire we know and love. As I mentioned The Knife That Killed Me is all about one teenager reflecting and what we see in the film is not the events as they happened but rather the events as he remembers them happening. His memories are focussed on the important events so rooms are stripped of extraneous details (and often all features) and instead are littered with handwritten notes, doodles, or images; all scraps of memories, emotions, and thoughts blown up and threaded through the narrative as Paul pieces together the moments that culminate with him lying lifeless and covered in blood.

Paul (Jack McMullen) is a teenager starting at a new school in the town where his dad (Reece Dinsdale) grew up. Following the loss of his mother the pair are looking for a fresh start and Paul struggles to find his place amongst the various social groups at school. Should he hang out with the “Freaks”, as lead by the enigmatic Shane (Oliver Lee) and featuring the enchanting Maddie (Rosie Goddard) or give in to the pull of the school bully, and pointedly named, Roth (Jamie Shelton)? In trying to keep everybody happy Paul’s life rapidly get’s out of control and he finds himself deeply out of his depth.

The visual style is initially jarring but once you acclimatise becomes the perfect canvas to tell this story. A story more commonly found in gritty british dramas and a filming technique suited to a fantasy adventure combine to make a unique visual style offering something unique and new. The lack of a traditional set quickly moves from a burden to a boon and there is only one moment where an actor looks like they are walking on the spot rather than across a room.

For something completely different and to support a pioneering piece of British filmmaking then The Knife That Killed Me is worth checking out. Directors (and co-writers) Kit Monkman and Marcus Romer have made a carefully crafted film with a fresh approach. It might take you as little while to get settled in but your effort will be rewarded.

The Knife That Killed Me is not getting a cinema release but will be available on DVD and VOD later this year. In the meantime the team plan to have a free multi platform premiere but need a little extra money to get it off the ground over on their Kickstarter page. There’s less than a day to go so if you are intrigued give it a look today.

2 thoughts on “The Knife That Killed Me – Film Review”