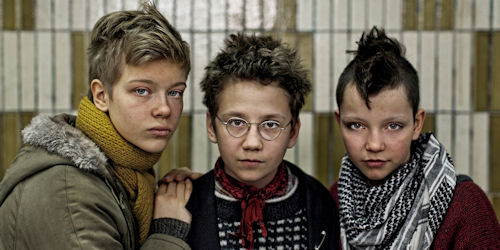 “Fun” is not a word I use a lot when talking about the film festival experience. Often films are better described by words such as “worthy”, “important”, “dull”, “oscar-worthy”, “impenetrable”, or “borderline pornographic” but with We Are the Best! there really is no better word to apply to it than “fun”.

It is Stockholm in the early 1980s, everyone is wearing amazing jumpers, and punk is dead. Or is it? Two young girls, Bobo (Mira Barkhammar) and Klara (Mira Grosin), team up to form their own punk band purely to spite a group of boys who want to use the same rehearsal space. With no musical skills to speak of they recruit friendless guitar-playing Christian Hedvig (Liv LeMoyne) and a new punk band (NOT a girl band) is formed.

The film focusses on the trio as they rehearse their only song (an angry tirade against sport and other less important issues like poverty), punk up their hair, and grow together, and occasionally apart, as friends. Incidents and plot points that might otherwise be taken too seriously are handled with a lighthearted touch as the girls experiment with alcohol, flirt with punk boys, and get ready to perform at a Christmas rock concert.

This is a film with no deep message, that doesn’t ask you to feel anything but joy at the antics of three excitable young punks as they try to rebel against a world that isn’t very oppressive. The film is gorgeously shot by director Lukas Moodysson; the colours are vibrant and one rooftop view of a wintry Sweden is breathtaking. My only criticism is that without a strict plot to adhere to the film runs roughly 10 minutes too long and feels a little baggy in the middle.

Like putting on a warm, slightly baggy, jumper We Are the Best! is good clean fun and a real treat when sampled in amongst some of the London Film Festival’s grittier offerings.