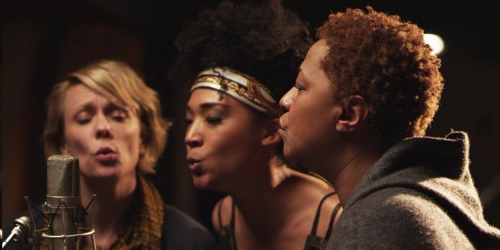 Left to its own devices then 20 Feet From Stardom would come across as a solid documentary about an interesting subject. Focussing on the life and career of the backup singer 20 Feet From Stardom explores how these underrated performers have over the years been both celebrated and exploited and tries to explain what stops these singers from breaking out as artists in their own right, or why they might not want to.

The film is fun and occasionally quite touching but more importantly features and epic soundtrack filled with dozens of tunes that will have you dancing in your seat and joggling the legs of the person sitting behind you. Vanessa Feltz took the role of dancer and I was the joggled when I saw the film but I don’t bear a grudge. If you want a fun hour and a half spend in the company of women with big personalities and even bigger voices then 20 Feet From Stardom is the documentary for you. Heck, it even won the Oscar for Best Documentary as predicted by me!

Sadly it is that very Oscar win that lets the film down. Without an Oscar win I would have enjoyed the film in isolation without over thinking it and could have moved on with my day. But no, it went and beat The Act of Killing to the top award and as such has become firmly lodged in my head as a film that must be superior to Killing and justify its win. Unfair as this maybe that is how my brain works.

Unfortunately The Act of Killing was an inventive and important feature in which Indonesian death-squad leaders were asked to dramatise their mass killings for a non-existent film project in the hope that they would finally be able to understand the horror of what they had done. Killing plays with the genre and as a result in a peerless examination of human nature and all the flaws and cruelty that come with it. By comparison 20 Feet From Stardom is much more traditional, staid, and ultimately trivial.

On its own 20 Feet From Stardom is a lot of fun but in context lacks enough punch to compete with the best.

20 Feet From Stardom is in UK cinemas from today.