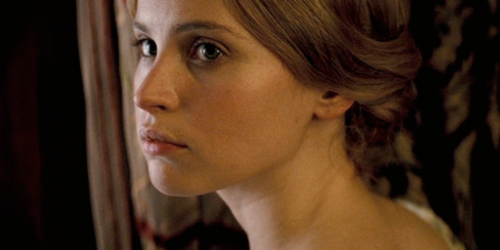 When watching a romantic drama you are well within your rights to expect the film to deliver two things; both romance and drama. Sadly The Invisible Woman does not satisfy in either of these departments as alas Felicity Jones has returned to films that aren’t quite good enough.

Ralph Fiennes is following up his perfectly fine directorial debut Coriolanus with a period drama about Charles Dickens (played by Fiennes) and his young mistress Nelly (Felicity Jones). Nelly is the invisible woman of the title as her relationship with Dickens is one that is both formally arranged and kept a secret. As a director Fiennes adapts well to the change of pace as The Invisible Woman adopts a much lighter, quieter, and subtler tone to Coriolanus and Ralph is more than capable of coaxing fantastic performances from his cast including, but not limited to, Joanna Scanlan, Tom Hollander, and Kristin Scott Thomas.

Sadly the one actor Fiennes fails to properly shepherd is himself. Much as in Coriolanus his performance feels all too stagey and over the top. Fiennes’ Dickens is a bounding man filled with silliness and joy but I could never quite shake the feeling that I was watching a performance rather than a real character. Fiennes’ acting was on display for all to see like seeing a giant zip going down the back of his costume. There is no denying that Ralph Fiennes is a fine actor but when it comes to directing himself on-screen I have so far found him a little too unrestrained and theatrical.

Felicity Jones in contrast is fantastic (of course I would say that). Her performance is one of subtlety and nuance which is often stomped out by Fiennes pantomiming around by her side. The film’s strongest moments come in its framing scenes in which an older Nelly is looking back on the affair as she faces moving on with her life. Dickens is now referred to as merely a family friend rather than the greatest love of her life. Jones’ stoney gaze as she walks along a beach contemplating her future and her past is a masterclass in understated performance that Fiennes should spend some time considering.

Back in the period of Nelly’s relationship with Dickens things unravel and the film fails to convince. I never really felt a spark between the pair of supposed lovers and their relationship felt cold and dispassionate as a result. While you could see on the surface why Dickens might be physically attracted to Nelly and she to his stature and confidence they never interacted enough to give one another to fall head over heels in love. We are supposed to believe in a love strong enough for Nelly’s mother (Kristin Scott Thomas) to allow the affair, and for Dickens to betray his wife (a brilliantly rejected and dejected Joanna Scanlan), but frankly it all seemed like they were getting a little carried away.

Without a romance to believe in and no real drama considering everybody pretty much OK-ed the affair, we are left with just a collection of fine performances, one overacting director, and a lot of wigs and bonnets. Not without its merits The Invisible Woman is another case of a good premise going unfulfilled.

The Invisible Woman is in selected UK cinemas on 7th February and is released nationwide on 21st February.