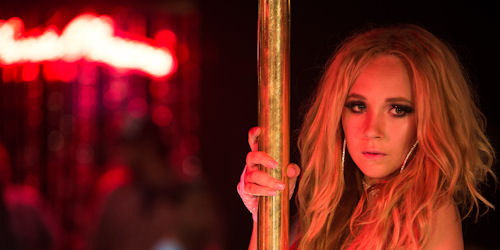 I’m ashamed to say that I was tricked. When I decided to see Afternoon Delight I thought I would be seeing a light-hearted comedy about an unlikely friendship between a bored housewife and a stripper. I was expecting a few laughs and for the stripper to end up turning her life around, the housewife to feel fulfilled, and for me to get some light relief from the emotional onslaught that the London Film Festival has become. Thankfully this was not to be.

The housewife in question is Rachel (Kathryn Hahn) whose career in PR came to a halt following the birth of her son and whose life now consists of crafting with fellow mothers and being ignored by her suddenly successful husband Jeff (Josh Radnor) who is too busy checking his BlackBerry and trying mid-life crisis activities (surfing, forming a band, that sort of thing) with the other dads. Their sex life now non-existent Rachel suggests they go to a strip club in order to spice things up in the bedroom. At the club Rachel gets a lap dance from stripper McKenna (Juno Temple) and they soon form an occasional friendship which results in McKenna moving in with the family after the car she is sleeping in is towed.

So far it sounds like a fun comedy right? A stripper living with a middle class family, whatever next!

Well what happens next is that the comedy slowly turns darker and evolves through comedy-drama into an out-and-out drama. McKenna’s involvement in the sex industry turns out to be much more… practical than they originally thought and the bored and sexually frustrated Rachel allows herself to take the whole situation a little too lightly and gets far to involved in the antics of their house guest.

It isn’t long before Rachel has changed her mind about McKenna as soon she no longer wants to save the young woman from a life of prostitution but instead simply wants her out of the house. Over one evening we see the mothers and fathers have separate drunken nights in and as the drink flows the camera starts to veer all over the place and in gloriously dramatic fashion everything comes to a head. What seemed like a bit of fun suddenly garners serious consequences and the polite world they inhabit with its first world problems comes crashing down around everyone involved.

Writer/director Jill Soloway has done a remarkable job of creating a film with such a dramatic shift in tone from start to finish. I was completely wrong footed and totally underestimated the film’s emotional potential when it began. Kathryn Hahn gives a hilarious but deeply sad performance as the women who proves that the devil makes work for idle thumbs and Juno Temple is surprisingly sympathetic as the sex worker who decides that revenge is a dish best served naked. Josh Radnor is Josh Radnor, which is no bad thing, and Jane Lynch manages to get a laugh simply by appearing on-screen in her small role as Rachel’s therapist.

Don’t underestimate Afternoon Delight; it may seem like a simple comedy but it has a sting in its tail that will strike once your defences are down.

Afternoon Delight does not yet have a UK release date.