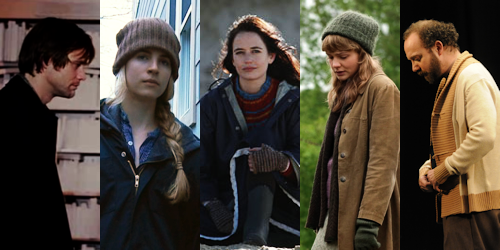 Every now and then I discover a specific sub-genre of film in which so many of my favourite films fit. Sadly these sub-genres don’t actually exist so it is up to me to name and define them. I’ll start with a sub-genre I’ve mumbled about in the past; Heavy Knitwear Science Fiction or HeKniSciFi for short.

What are you talking about?
Heavy Knitwear Science Fiction covers all of those films in which there is a strong science fiction element at the crux of the plot and the film’s main focus is on the emotions of the characters rather than the fictional science itself.

Science Fiction tends to be quite futuristic, have a cast of characters in form-fitting clothing, and the futuristic technology is sleek and shiny. In a HeKniSciFi film the characters do tend to be wearing a lot of knitwear (just look at the image above) and the technology is often much more rustic. It is the difference between a man in Lycra on a spaceship travelling through time and a man in a sweater on a farm travelling through time and being emotional about it.

Sci-Fi has science fiction driving the plot throughout whereas HeKniSciFi takes the science fiction as a catalyst and then concerns itself with focussing on how miserable everyone is (in the best possible way.) Budgets are lower; you can expect a lot more wood and natural fibres in the furnishings in a HeKniSciFi and infinitely fewer explosions.

My only issue is that I think the term Sci-Fi automatically conjures up an image of humanoid aliens and galaxies far, far away and doesn’t accurately represent the full spectrum of the genre. Later I will list films that fall within HeKniSciFi and I hope that you will agree that while they contain fictional science they are a far cry from Sci-Fi.

Give me an example
A good comparative example comprises of Michael Bay’s 2005 action adventure film The Island and Mark Romanek’s 2011 indie drama Never Let Me Go. A look at a still from each film should give a good idea of what I am writing about:

The top image shows the leads in The Island, the bodysuits just scream Sci-Fi while the second image of three young adults with wavy hair could be taken from any indie drama of recent years. And yet they have the same plot. Both feature individuals in a secluded society who discover that they are clones who will eventually have their organs harvested when someone in the outside world needs them.

In The Island the clones live in an underground compound, wear tight white bodysuits, and upon discovering the truth go an adventure to find their real selves while being chased by a mercenary. As this is Michael Bay you can rest assured that explosions and fast bikes are included.

In Never Let Me Go the clones are brought up in an English boarding school, wear heavy knitwear, and upon discovering the truth do very little about it. While they do have a day trip to find one of their real selves the focus of the film is on the central love triangle. There are no explosions beyond Andrew Garfield shouting on a beach.

What other films fit the genre?
Other films in this genre include Eternal Sunshine of the Spotless Mind (a man wipes his memory of a past love and in doing so relives their relationship), Another Earth (a young woman falls in love with a man whose family she accidentally killed while a second Earth appears in the sky), Womb/Clone (a woman gives birth to a clone of her dead boyfriend and experiences confusing emotions), and Cold Souls (an actor literally swaps his soul to better act in a Chekhov play). In each of these films there is a fictional technology at the film’s core but our focus is on the emotions of the lead character. They all feature heavy knitwear too but that is not an essential requirement.

The next time you see a low-budget film with a high concept and a chunky jumper just think about it. Are you watching Sci-Fi or HeKniSciFi? Does Looper fit the bill or Safety Not Guaranteed? Discuss.