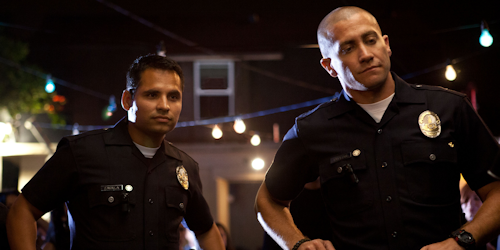 Gambit
Wacky fun with Firth, Diaz, Rickman, and Tucci in a caper about art forgery. Despite the long list of big names and a Coen brothers screenplay the critics don’t seem to enjoy the film. 13% on Rotten Tomatoes – I expect better from you these days Mr Firth.

Silver Linings Playbook
A romantic comedy about crazy, sexy, and crazy sexy people who help one another sort their lives out in a film with a title that makes little to no sense but it doesn’t really matter when you have Jennifer Lawrence and Bradley Cooper beaming out from the poster.

Nativity 2: Danger In The Manger!
Family film about a school competing in the National ‘Song for Christmas’ Competition. Factors in the film’s favour are a Coventry (my home town) setting and the involvement of the great David Tennant. Sadly I absolutely loathed the original film so don’t hold up much hope for this sequel.

End of Watch
Found footage cop drama in which both the police and the criminals happen to be filming themselves. Everyone does this in LA though right?

Starbuck (limited release)
A man in his forties struggles to deal with his lover’s pregnancy while being sued by the 142 children he has fathered via artificial insemination.

Lawrence of Arabia (limited release)
Fifty years after its original release this classic film I haven’t seen is back in cinemas. If you fancy seeing Peter O’Toole bobbing around a desert for over three hours there’s no better film.

The House I Live In (limited release)
Documentary about… erm… “From the dealer to the narcotics officer, the inmate to the federal judge, a penetrating look inside America’s criminal justice system, revealing the profound human rights implications of U.S. drug policy.”

Cinema Komunisto (limited release)
I have no freaking clue: “When history has a different script from the one in your films, who wouldn’t invent a country to fool themselves? The collapsing sets of Tito’s Hollywood of the East take us on a journey through the rise and fall of the illusion called Yugoslavia. Exploring the ruins of the forgotten film sets and talking to directors, producers, policemen and Tito’s protectionist about the state-run film studios and Tito’s personal love for cinema and it’s stars, ‘Cinema Komunisto’ uses film clips to go back to the film when ‘His story’ became the official history.”

Ninja Scroll (limited release)
With a name like this you are either already going to see this film or never will. You don’t need me to tell you that it is about a “ninja-for-hire … forced into fighting an old nemesis who is bent on overthrowing the Japanese government. His nemesis is also the leader of a group of demons each with superhuman powers.” Oh you do? Good job I did then. Idiot.