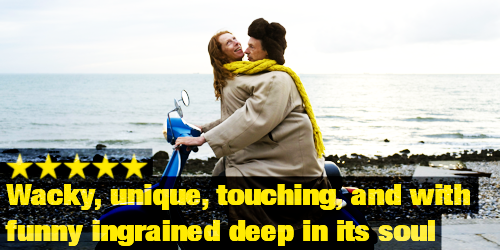 The Fairy is the third collaboration from Belgium-based trio Dominique Abel, Fiona Gordon and Bruno Romy and in short it is absolutely fantastic. Hotel clerk Dom lives a boring life until one night Fiona checks into his hotel, tells him she is a fairy, and grants him three wishes. Dom and Fiona fall in love (during an underwater dance sequence) and must fight to stay together.

The Fairy is unusual in that it is a comedy relying mostly on visual gags and slapstick yet somehow it does this without ever seeming too broad, juvenile, or lowbrow. Instead the physical humour is almost clown-like – it is graceful, controlled, and truly hilarious. It’s hard to get across just how wonderful the film was, to describe any sequence in too great detail might ruin the effect should you see the film yourself. What I will reveal is that the film contains the funniest birth scene, car chase, foot chase, disguise, blind bar man, musical number, dance sequence, and dog smuggling I have had the pleasure of seeing.

The film came from such a fresh direction that the audience in my screening didn’t quite know what to do with themselves. A large proportion sat in stony silence while a few of us laughed loudly (and at times snorted embarrassingly) and a couple on the back row repeatedly exclaimed, “Oh my god, what on earth is this film?”. When I try to draw comparisons between The Fairy and other things I have seen I find it hard to find another work that sufficiently matches the eccentricity and energy on display here. If you can imagine the physical humour of Peter Sellers’ Inspector Clouseau combined with the fun-loving slap-stick high-energy double-barrelled fun to be found in the stage version of The 39 Steps then you’re almost going to get a sense of how The Fairy will make you feel.

Wacky, unique, touching, and with funny ingrained deep in its soul The Fairy reached deep down inside and touched me somewhere I’m ticklish. Much like I felt after first seeing The Artist I left the screening with a broad smile and a warm heart.

The Fairy is on limited release 29th June 2012. Make the effort and see a modern comedy marvel.