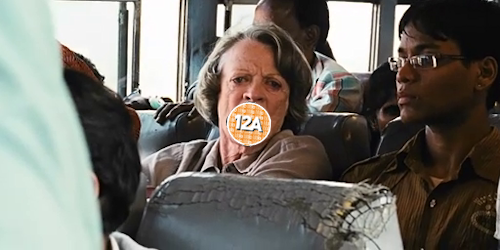 Last night I was invited along to a screening of The Best Exotic Marigold Hotel, a film with a trailer so filled with British ‘National Treasures’ that I nearly fell over myself with excitement. As someone who only falls over themselves once a week, this was no mean feat. I can’t tell you whether I liked the film or not, but I can bore you with something interesting* I noticed over at the BBFC. Just try to stop me.

The BBFC has rated The Best Exotic Marigold Hotel as 12A and in their consumer advice say that the film “contains strong language, moderate sex references and racist remarks.” I was surprised to see racist remarks highlighted as a reason parents may not want their children to see a film, though I’m not sure why as racism is of course vile and reprehensible. I’m not afraid to take a widely supported and uncontroversial stand.

Digging deeper, as only someone with too much time on their hands does, I found over at the Parents BBFC website guidelines for what sort of language the BBFC will allow at 12A:

So there you have it, you can only hear racist slurs which are not clearly condemned when you are at least 15 years old. I suppose the aim is to not expose the nation’s children to endless streams of fully endorsed racism until they are old enough to feel sufficiently outraged. Makes sense to me.

Interesting* also to note that American History X, a film about neo-Nazis and filled with racism so strong it borders on the unwatchable, has no mention of racism in its consumer advice from the BBFC. Hmm.

There you have it, a series of facts strung together into something almost resembling a coherent dialogue. Now if you’ll excuse me I have to go and wrestle with the Oscar Nomination live-stream again.

One thought on “Are You Old Enough for Racism?”