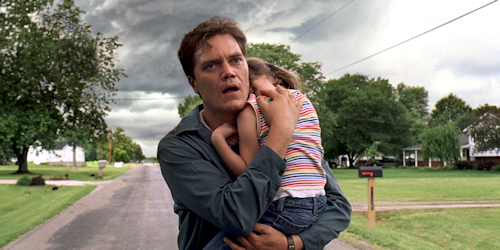 Curtis (Michael Shannon) is having trouble sleeping. Each night he has terrible nightmares along a similar theme, a storm is coming and bringing with it thick rain which drives people insane. As Curtis sees people he trusts turn again him in his dreams he cuts them from his life in fear of his visions coming true, all the while building an expansive storm shelter in his back garden. His wife Samantha (Jessica Chastain) does her best to support her husband, but is torn between caring for a troubled man and looking after their deaf daughter. The big question is whether Curtis is developing schizophrenia or is foretelling a coming apocalypse…

In many ways this is the dramatic equivalent of Evan Almighty as one man ignores the criticisms of his loved ones in the pursuit of protecting them from a storm he has foretold. The main difference being that Take Shelter is infinitely better in every way.

Shannon is brilliant as Curtis, a man plagued by his dreams, trying to save his family while not letting them know how terrified he is. We can see Curtis’ inner feeling and the mask he hides them behind. Jessica Chastain and Shea Whigham are perfect as his wife and best friend, both willing to help Curtis but ultimately are hurt by his mistrust. Though ably supported by this great cast it is Shannon who has to carry the film, there is not a scene without him in, and he does so fantastically.

Jeff Nichols direction is simple for the most part, his gentle scenes of domestic tension lulled me into a relaxed state, making the violent dreams all the more distressing when they bellowed onto screen. The lulling does get a little out of hand at times as the film takes too long to get to the conclusion the rest of the two hours has been building to. This is a clever, well told story but does not need to be this long to be told in full.

A quality film with a bit too much flab, Take Shelter is an enthralling watch and a great showcase for Michael Shannon.

Take Shelter is released in UK cinemas on 25th November 2011.