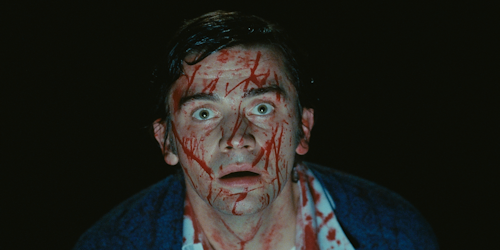 In Last Screening Sylvain (Pascal Cervo) manages a traditional cinema that is soon to close it doors. In a state of extreme denial he continues his job as normal ignoring the fact that the cinema has been sold and he no longer has a job there. In a bizarre turn Sylvain is also a mass murderer, killing female victims and taking a grim souvenir. Before long Sylvain has allowed his murderous streak, and his attempts to keep the cinema open, to overlap, all the while trying to maintain a blossoming romance.

Writer/director Laurent Achard draws direct comparisons with Norman Bates in Hitchcock’s Psycho by including flashbacks back to Sylvain’s abusive childhood at the hands of his mother. A childhood which instilled not just a love for cinema but a lust for blood. Ultimately Achard is commenting on the death of film projectors in cinemas and the digital progression of films, sadly this message gets lost in a grim and surprisingly dull horror.

Last Screening is astonishingly boring for a film lasting just 80 minutes, a real disappointment considering the intriguing synopsis. With an uncharismatic killer taking the lead and a selection of victims we don’t know enough about to care for, it is hard to get involved in proceedings; the whole palaver instead left me cold and on the verge of sleep. This cinematic narcolepsy was not helped by a bounty of shots which may well be aesthetically pleasing, but offered nothing in the way of action or plot progression.

The premise and execution have enough substance to make a decent short film, but are stretched to breaking point as a feature-length production. Tedium in a horror is a crime against the genre.

Last Screening is released in France on 7th December 2011 and isn’t worth a trip on the Eurostar.