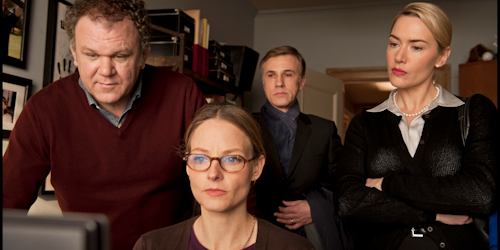 In Carnage the Cowans (Kate Winslet and Christophe Waltz) are visiting the Longstreets (Jodie Foster and John C. Reilly) to discuss the fact that the Cowans’ son hit the son of the Longstreets’ in the face with a stick. Everything starts off amicable with the couple being over polite and middle-class about the incident, but as things progress their facades slip and rivalries form.

At first there is a shift from two feuding couples to a battle of the sexes as the wives gang up against their husbands, but before long it seems as if each of the foursome hate one another in equal measure. A this film is adapted from a play there is only one setting, the film progresses in real-time and it all hinges on excellent dialogue from Yasmina Reza and Roman Polanski and quality acting from the ensemble. Each actor takes on a dual role, portraying both the compassionate version of their character and the unpleasant snob that lies beneath.

Roman Polanski doesn’t bring any real cinematic quality to the film, instead allowing the acting to carry the film and so it could be argued that nothing is gained by putting this play on screen. However, the format allows a mainstream audience to see a quality play acted out by a collection of A-Listers you may never get together in the theatre. I love plays and I loved Carnage.

If you like to see four good actors having fun with a theatrical script that takes a swipe at middle class values then this is for you. Though if this applies to you, you’re most likely middle class, you hypocrite.

Carnage screens at the London Film Festival today and this Saturday and is in UK cinemas from 3rd February 2012.