Like so many things I claim to love my experience of The Muppets is narrower than I realised, particularly when it comes to their earlier work. More familiar with their films of the nineties, when they moved onto film parodies/pastiches, I had never seen The Muppet Movie before I sat down to watch it for BlogalongaMuppets.

What little plot The Muppet Movie has revolves around Kermit travelling from his swamp to Hollywood, picking up Muppets along the way and evading capture from an ad man who wants the dancing frog to star in his TV commercial. There’s not a whole lot to grab hold of here, just a few disjointed and underwhelming scenes ties together with lacklustre songs about rainbows and “moving right along”.

The film is at a risk of being a little too meta, with one character forced to catch up on the plot by reading the screenplay. It’s as if we’re supposed to accept the meagre plotting because no one onscreen is pretending that this is a reality. 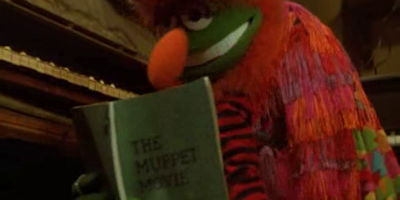 For a film relying so heavily on an existing knowledge of (and unconditional love for) the Muppets, The Muppet Movie lacks the energy and excitement we fell in love with in the first place. The film isn’t terrible, just not what I had been expecting. It probably doesn’t help that most of the cameos completely passed me by, at 23 am I too young to appreciate The Muppet Movie?

Most damning of all is that Kermit’s journey to Hollywood seemed to change him. Setting off from his swamp the plucky frog just wanted to make people happy, but by the time he reached Hollywood he simply asked to be rich and famous. Maybe this is a deeper film than I first thought, one about how fame and fortune corrupts? Oh Kermit, you should have stayed at the swamp.

2 thoughts on “The Muppet Movie – BlogalongaMuppets 1”