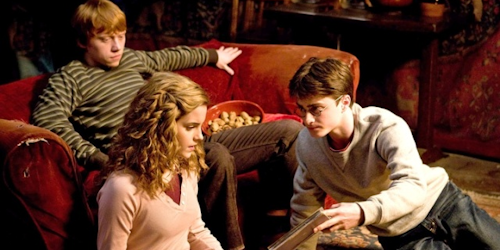 What follows is the result of sleep deprivation, a Thermos of coffee and a pile of scrawled notes.

EDIT: Updated versions of the charts below can be found in our new retrospective posts on the seven films and the young actors.

On Saturday night Mild Concern returned to the BFI IMAX to finish the Harry Potter All-Nighter marathon. To keep ourselves stimulated and, at a more basic level, awake, we discussed each film in between, scoring various aspects, making notes and even counting one specific phrase. In this post we’ll have a look at some of what we noted down, what this says about the franchise’s progression and what it can tell us about the final film. Once that final film is out we will review it alone and then all eight as a whole, as our final word on the franchise we grew up with.

But first, let’s talk about the IMAX. Our two recent trips have been great, the image is crisp and clear and so wide my peripheral vision was fully taken up with the world of Potter. Films were made to be seen on the big screen and this is the biggest screen in the UK, what more can we say?

Still, there were two drawbacks. The minor one was some distracting disco lights at the bottom of the screen during Order of the Phoenix. The second, more important, factor was a sequence in 3D in two of the films. The 3D worked in a few shots but for the majority of the time it gave us both double vision, caused one of us headaches and made the action scenes extremely hard to follow. Thankfully most of the films are made entirely in 2D, but the upcoming Deathly Hallows Part 2 is another matter.

Presentation quibbles out of the way, onto the charts!

One of the key factors in the series was the child actors’ ability to act. Each of Harry, Ron, Hermione and Draco were given a score from 1 to 10 after each film and the results can be seen below. (Neville Longbottom was left out for being a perfect 10 in every film.) 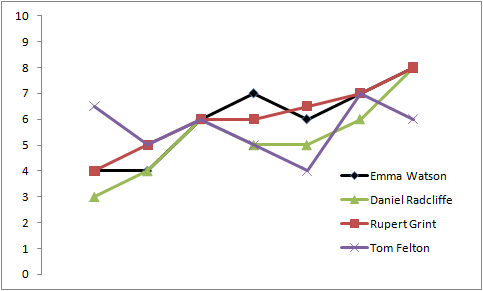 The main point to take from this graph is that while the three leads started off at varying levels of talent, by the end of the seventh film they had evened out, ready to enter the final film with eyebrows under control and emotions in check. With the seventh film centred less on big battles and more on emotions in a tent, its success relied on the big three getting their acting up to scratch. 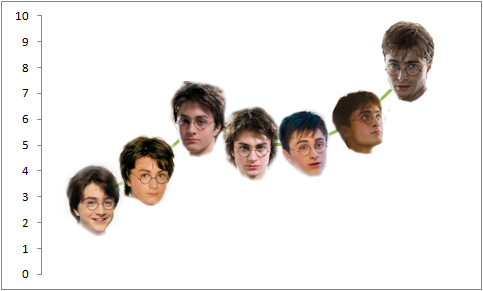 Poor young Harry started off with the least acting ability of the lot. It was genuinely shocking to see how bad he was way back in the first film ten years ago. Radcliffe learnt on the job and gradually got better up until the fourth film where he was required to lose control of his emotions. Anger and sadness at the death of a friend and the rise of an enemy were not within Radcliffe’s range and he dropped back down. From then he slowly recovered before gaining comedy chops in Half Blood Prince and then proper dramatic muscle in Deathly Hallows Part 1. Just about ready to lead a franchise then? 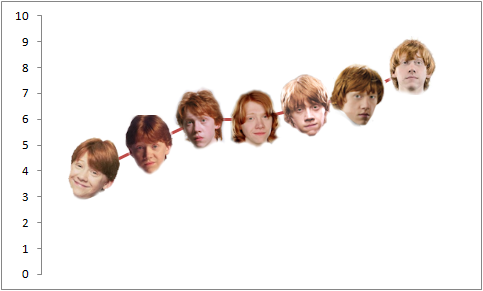 In the first film Ron was the comic relief and while Grint was good at giving the odd one liner or silly reaction shot, it was hardly a stellar performance. Back in 2001 I gave him a lot more slack thanks to Radcliffe lowering the bar so much. In the decade that followed Grint has continued to improve and for the final film he can do comedy, pathos and poses a legitimate threat. Not bad for a Weasley.

Ah, Emma Watson. My suggestion to chart her journey from “aww” to “phwoar” was soundly rejected so this chart is purely based on her acting talents (verified by the one of us not attracted to Watson). For the first two films Watson wasn’t having much luck. In Philosopher’s Stone she struggled with over-enunciating words and followed that up in Chamber of Secrets with some over-active eyebrow work. In films three and four Watson gained ground, tamed her eyebrows and won our sympathies. After that the eyebrows returned with a vengeance and added some irritating breathy pauses for bad measure. By Deathly Hallows Part 1, she managed to fight them off again and rose to join her co-stars at 8/10, all three essentially starring in an indie character drama in the middle of a fantasy franchise.

As a clear front-runner in the first film, Felton had the most to lose from becoming less of a presence in the middle before gaining character in the later films. In truth, poor Felton was at the mercy of how involved Malfoy was in the plot of each film. In some he was so sidelined as to be reduced to a few scenes of inconsequential sneering. However, it was in The Half Blood Prince when Malfoy is forced to question his allegiances and the motives of his parents that Felton finally got another chance to shine and not be forgotten. In a few weeks we’ll see if he gets much to do in the grand finale.

It is a long-standing joke that everyone seems to greet the character of Harry Potter by saying his full name in awed tones. Curious to see just how many times “Harry Potter” was said during the franchise we tried to keep a tally. The results are in the graph below but due to some of these films starting at 4am, we really can’t guarantee their accuracy.

The were two major factors in creating a lot of “Harry Potters”: either an early film where Harry is introduced to a lot of people (marked I on the graph above) or any film with Dobby the house elf (marked with a D). As you can see the second film fits both criteria and so is a hotbed for “Harry Potter”s. 14 of those were before they even reached Hogwarts. Believe me, at 2am this seems really, really important.

Acting and full-name-of-title-character-saying aside we gave each film two more very important scores. The first was simply an overall score out of ten and the second a score of how “dark” each film was. This is essentially because each film was marketed in its time as the darkest of the franchise so far. Funnily enough our scoring reflects this as the films steadily move from a mostly light-hearted family flick to everyone’s lives and society itself coming under threat. When ethnic cleansing becomes a real possibility, you know there won’t be another Quidditch match.

Overall score also goes up with each film. The first films were not exactly terrible, both earning mediocre 3-star reviews, but each subsequent film was better than those that preceded it. Popular opinion is sometimes that Prisoner of Azkaban is the best of the series and having seen them all back to back, I can see why. After the mediocrity of the first two films, the third arrives with such confidence, style and a clear vision that it feels like the saviour has come, possibly inflating our view of it, and it does indeed keep getting better after.

If you’ve made it this far then hopefully you’ll have the same conclusion as me, that Deathly Hallows Part 2 will be the darkest, best acted film in the franchise with between 10 and 20 uses of “Harry Potter”. Most importantly it will be the best in the franchise and you only have to wait until 15th July to enjoy it.

5 thoughts on “Harry Potter – A Premature Retrospective… With Charts”