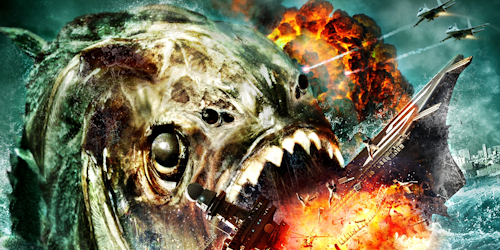 This weekend I have been investigating the small selection of new piranha based films, taking in Piranha 3D and The Asylum’s mockbuster Mega Piranha. Both films involving a lot of man-eating piranha’s but which one is the best? Let’s break it down.

Gore
Good gore costs money and Mega Piranha offers nothing more than the occasional bit of red water as people are often eaten out of shot, under the water or in one mouthful. Piranha however was a bounty of gore with a crushed skull, missing limbs, a split torso, multiple bony bits stripped of all flesh and one horrific moment with a face, some hair and a propeller.
Winner: Piranha

Laughs
The trouble with Mega Piranha was that it took itself a bit too seriously and as such had about two jokes throughout leaving the only humour stemming from the appalling acting on display. Piranha however played pretty much everything for laughs and ramping up the gore, and boobs, to such a degree that it was a joyful farce.
Winner: Piranha

Boobs
Mega Piranha clearly does not have the money to convince their cast to disrobe and as such has a total of two topless women, who it was explained on the DVD documentary were local prostitutes… lovely. Piranha, as with everything else, really pushed the boat out and made the most of its 18 rating. There’s even a dismembered penis for the ladies making a wonderful addition to the gore category.
Winner: Piranha

Piranhas
The piranhas in Piranha were well rendered little monsters but ultimately were quite small for the majority of the film. Their counterparts in Mega Piranha are really badly produced creatures but rapidly increased in size, by the end reaching the size of buses as they dive bombed buildings in a way reminiscent of Birdemic: Shock and Terror .
Winner: Draw

Plot
In Piranha an earthquake opening up an underground lake housing an extinct form of viscous piranha brought about disaster while in Mega Piranha scientists were trying to breed a fish that could grow to huge sizes and end world hunger. Both wonderfully schlocky premises worthy of a creature feature.
Winner: Draw

The clear winner here is Piranha or as it likes to be called Piranha 3D. Though it’s 3D is not the best I’ve seen, it is a hell of a lot of fun and worth the 90 minutes of your life.

Piranha is in cinemas nationwide now and Mega Piranha is available on DVD now.